Could Skyrmions Be the Next Big Thing in Data Storage?

An ultrathin multilayer film could harness the properties of magnetic skyrmions as data-storage devices on magnetic media. 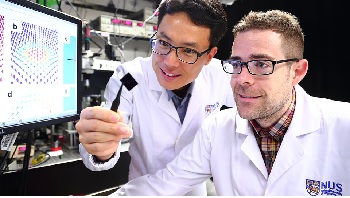 A magnetic skyrmion is the smallest possible perturbation to a uniform magnet: a point-like region where magnetism is reversed. Scientists have studied these nanometer-sized phenomena since their discovery in 2009, intrigued by the possibility that skyrmions could become the next generation of information carriers.

Skyrmion stability has proved to be a drawback. They exist in systems with a heavy-metal layer beneath a ferromagnetic material. This arrangement creates an interfacial symmetry breaking interaction, known as the Dzyaloshinskii-Moriya interaction (DMI), which stabilizes the skyrmion. An out-of-plane magnetic field intersecting the system destabilizes it.

The research results demonstrated both the usefulness of L-TEM as a method for studying skyrmions and the potential for stabilizing the structures. Prof. Yang Hyunsoo, project lead, said that “the small size of the skyrmions, combined with the incredible stability generated here, could be potentially useful for the design of next-generation spintronic devices that are energy efficient and can outperform current memory technologies.”