There is nothing worse than getting your pupils dilating during an eye exam. It hurts for one thing, and leaves your vision blurry for hours afterwards. Sometimes, patients can’t tolerate dilation because of eye surgery or eye disease.

Because of this, researchers at the University of Illinois at Chicago College of Medicine and the Harvard Medical School have developed a new method that involves a cheap, portable camera that can photograph the retina without the need for pupil-dilating eye drops. The better part is that the device is made out of cheap parts available online for a cost of about $185.

“As residents seeing patients in the hospital, there are often times when we are not allowed to dilate patients — neurosurgery patients for example,” says Dr. Bailey Shen, a second-year ophthalmology resident at the UIC College of Medicine. “Also, there are times when we find something abnormal in the back of the eye, but it is not practical to wheel the patient all the way over to the outpatient eye clinic just for a photograph.” 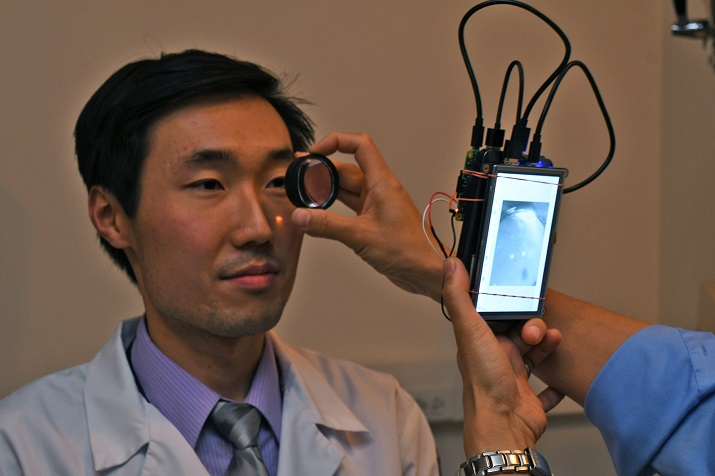 Dr. Bailey Shen has his retina photographed using a camera based in the Raspberry Pi 2 computer. Source: University of Illinois at Chicago The camera is small enough to fit in a pocket and takes pictures of the back of the eye without eye drops. Photos then can be shared with other doctors and placed in a patient’s medical records.

Researchers built the camera using a Raspberry Pi 2 computer that is connected to a cheap infrared camera and a dual infrared and white light emitting diode (LED). A lens, small display and several cables finish the camera.

The camera emits infrared light, which the iris does not react to. Most retina cameras use white light, which is why pupil-dilating eye drops are needed. In this camera, the infrared light is used to focus the camera on the retina, which takes just a few seconds, and a quick flash of white light is delivered as the picture is taken.

The photos show the retina and its blood supply, as well as the portion of the optic nerve that leads into the retina, which can reveal health issues such as diabetes, glaucoma and elevated pressure around the brain.

“The device is currently just a prototype, but it shows that it is possible to build a cheap camera capable of taking quality pictures of the retina without dilating eye drops, “ Shen says. “It would be cool, someday, if this device or something similar was carried around in the white-coat pockets of every ophthalmology resident, and used by physicians outside of ophthalmology as well.”