A new type of display creates 3-D images by using a laser to form tiny bubbles inside liquid. The columnar display itself is three-dimensional, or volumetric, permitting viewing from any angle without special glasses or headsets.

Researchers led by Yoshio Hayasaki of Utsunomiya University, Japan, describe the technique in a paper published in Optica, The Optical Society journal. 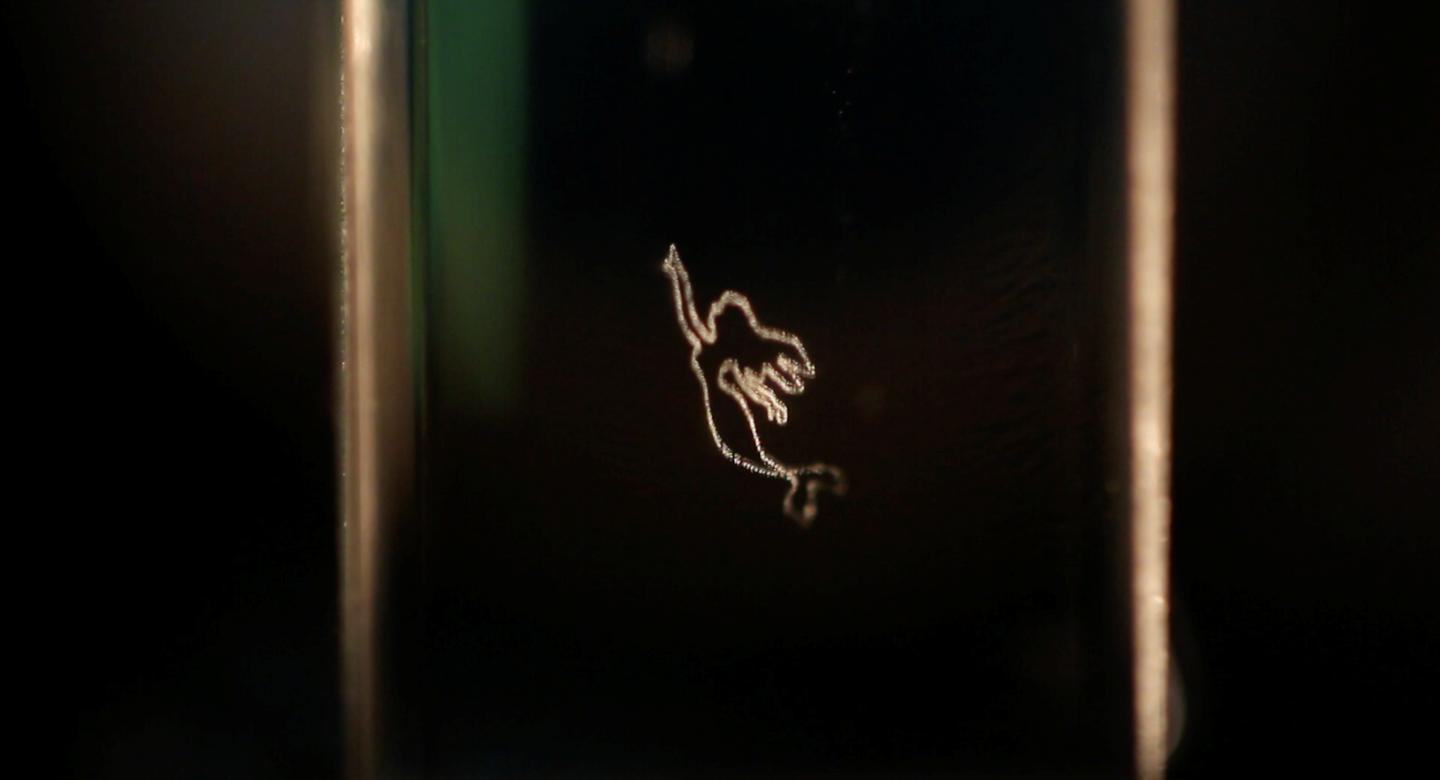 A laser-generated 3-D mermaid suspended in a glass column filled with liquid could represent the next generation of display technology.The bubbles for the new display are created through multiphoton absorption: Multiple photons from a femtosecond laser are absorbed at the point where the light is focused. The researchers created microbubbles at very precise locations by moving the focus of the laser light to various parts of a liquid-filled cuvette. The high-viscosity liquid prevented the bubbles from immediately rising to the top of the liquid.

The researchers then used a high-power LED to illuminate the bubble graphics, making them visible. By switching the color of the LED, the researchers produced monochromatic images in white, red, blue and green. Illuminating the graphics with a projector could create different colors in different regions of the image, the researchers wrote in the paper.

"Creating a full-color updatable volumetric display is challenging because many three-dimensional pixels, or voxels, with different colors have to be formed to make volumetric graphics," said Kota Kumagai, first author of the paper.

Rather than creating each bubble one by one, the researchers used a computer-generated hologram to form 3-D patterns of laser light that let them control the number and shapes of the microbubble voxels. This approach also increased the amount of light scattered from the microbubbles, making the images brighter.

The technology could have a number of applications in venues that currently deploy LED walls or digital signage to capture people’s attention, educate and entertain. Museums, theme parks, retail venues, restaurants and even roadside advertisements could use the technology to create more engaging displays viewable from any angle.

The 3-D displays could also have healthcare applications: Doctors could view a patient’s internal anatomy in three dimensions, from any angle, prior to surgery or for diagnoses that currently use 2-D imaging technology.

Additionally, by using drones to capture images of terrain and then rendering those images in volumetric 3-D, the military could plan missions with more in-depth, real-world knowledge of what to expect

Technology that Disrupts and Redefines Displays

According to the press release, the researchers are now developing a system that would use a stream inside the liquid to burst the bubbles, allowing the image to be changed or cleared. They are also working on methods that could allow the formation of larger graphics, which requires overcoming spherical aberrations caused by the refractive index mismatch between the liquid screen, the glass holding the liquid and air.
"Our bubble graphics have a wide viewing angle and can be refreshed and colored," said Kumagai. "Although our first volumetric graphics are on the scale of millimeters, we achieved the first step toward an updatable full-color volumetric display."