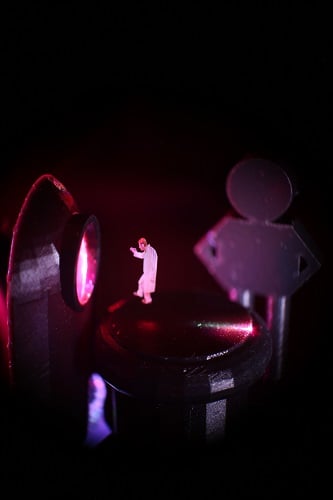 Holograms have captured the imagination since they started being popularized in entertainment thanks to Princess Leia’s appearance in the classic science fiction film “Star Wars.” Since that time, holograms have been seen in numerous movies as cool futuristic technology that is far from reality.

"We refer to this colloquially as the Princess Leia project," says Daniel Smalley, electrical and computer engineering professor at BYU. "Our group has a mission to take the 3D displays of science fiction and make them real. We have created a display that can do that."

Smalley says the image of Princess Leia is not an actual hologram but a 3D image that floats in the air where you can walk all around and see it from every angle. This was also used for Tony Stark in the “Iron Man” movies as he interacts with the suit or from the image projection table in the film “Avatar.”

A holographic display scatters light only at a 2D surface. If you don’t look directly at the surface, you won’t see the 3D image because you must be looking at the scattering surface to see the image. A volumetric display, such as the ones seen in these movies, has little scattering surfaces throughout a 3D space — meaning it occupies the same space by the 3D image and can be viewed from any angle.

The display developed by BYU is a free-space volumetric display platform based on photophoretic optical trapping. This produces full-color, aerial volumetric images with 10-micron image points by persistence of vision. The team uses a laser beam to trap particles and then steers the beam around to move the particles and create an image.

"This display is like a 3D printer for light," Smalley says. "You're actually printing an object in space with these little particles."

So far, the researchers have 3D light printed a butterfly, a prism, the stretch-Y in the BYU logo, rings that wrap around an arm and an individual lab coat in a crouched position similar to Princess Leia. BYU says the research is the first 3D image display to use optical trapping and color effectively by trapping particles and illuminating them with colorful lasers.