The 5G Base Stations: All Technologies On Board

The fifth generation of cellular technology promises many things, possibly too many considering the work it will take to achieve them, not the least of which is expanding into spectrum from 6 GHz well into the millimeter-wave region where few have ventured before. In addition to the immense challenges of operating there, this leap will require every viable semiconductor technology to generate RF power for the transmit sections of base stations of various sizes. Gallium arsenide (GaAs), gallium nitride (GaN), RF CMOS, and silicon germanium (SiGe BiCMOS) all will play a role. To see where they all fit, it’s first important to compare the frequencies used today with those on tap for the future.

In the U.S., wireless carriers operate on licensed bands from 700 MHz to 2500 MHz and up to 3.5 GHz in other countries. 5G, formally called IMT-2020, will increase these frequencies dramatically although precisely what bands will be chosen awaits conclusion of the World Radiocommunication Conference 19 (WRC-19) in late 2016 organized by the International Telecommunication Union (ITU). However, Table 1 shows just how dramatic this expansion will be.

Additional frequencies below 6 GHz are also available in certain regions and countries, and others designated for IoT connectivity will be used in the future too. All frequencies in the table fall within or just shy of what is considered the millimeter-wave region (30 GHz). Once IMT-2020 begins to be implemented it will mark the first time frequencies above about 4 GHz have been used by the cellular industry.

Virtually all macro cellular base stations today are powered by LDMOS RF power transistors and RFICs, as they deliver an excellent combination of high RF output power, efficiency, gain, and ruggedness. They will continue to dominate below about 4 GHz above which LDMOS performance declines. GaN on Si and GaN on SiC technology represents a major challenge to LDMOS in the future as costs continue to decrease.

GaN has significant and well known benefits not achievable by any other RF and microwave semiconductor technology, such as 10 times the power density per unit of die area than GaAs, high efficiency at high frequencies, high potential operating voltage, and the ability to operate over very wide bandwidths. So above about 4 GHz, GaN will increasingly power macro base stations, as well as smaller base stations along with GaAs. Once it matures, GaN may be used at millimeter-wave frequencies as well.

There are two good reasons why the millimeter-wave region remains largely quiet today except for commercial and military satellite communications systems, defense systems, vehicle radar, police radar, and scientific applications. First, signal propagation becomes more and more problematic as frequency increases because the resonance of atmospheric oxygen molecules causes them to absorb electromagnetic radiation to greater degrees (although not linearly), as can be seen in Figure 1. So operating in the troughs between the regions where absorption is highest is obviously essential. 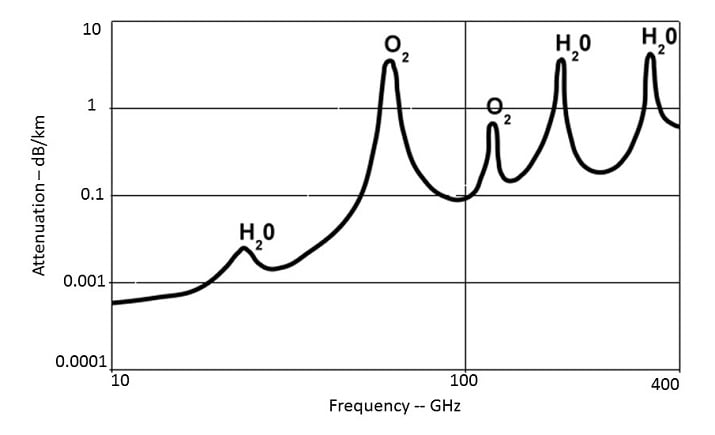 Atmospheric attenuation by water vapor (H2O) and oxygen (O2) versus frequency from 10 to 400 MHz. Absorption is not linear but drops at certain frequencies that are better suited for signal propagation.

The challenge presented by these very high frequencies is immense. Absorption at about 4 GHz is only 0.0001 dB/km while at 60 GHz, which is within a high absorption region, attenuation is nearly 6 dB/km. Combined with other factors such as phase dispersion and group delay, attenuation can increase to about 15 dB/km as shown in Figure 2. The issues of absorption also to various degrees at lower millimeter-wave frequencies proposed for IMT-2020 such as the region around 30 GHz, currently occupied mostly by satellite communications systems. 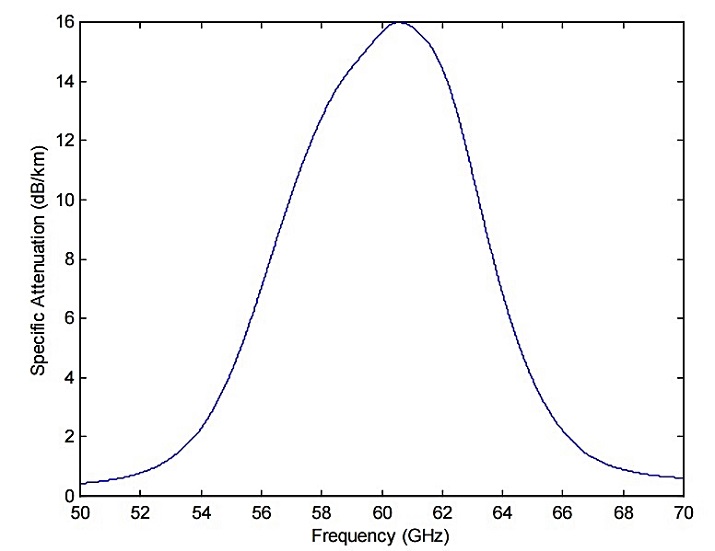 This is obviously a huge problem in its own right but is compounded by the second factor: generating reasonable amounts of power using semiconductor devices at these frequencies. Viable semiconductor technologies include SiGe BiCMOS, GaN, and RF CMOS, all of which currently deliver RF output powers of less than 1 W at the highest frequencies. As none of these technologies can produce the eye-watering amounts of power needed to overwhelm the attenuation caused by atmospheric absorption, designers of both millimeter-wave transmitters will need to rely on very high antenna gain, massive MIMO, and other techniques in order to make communication possible over reasonable (although still short) distances.

That said, millimeter-wave frequencies will only be used for very-short-range communication anyway to meet IMT-2020’s mandate to reduce round-trip latency to 1 ms or less, which the laws of physics dictate can only be achieved over short distances. To accomplish this, small-cell base stations will be deployed everywhere wireless signals must be delivered, especially indoors.

The Lure of RF CMOS

RF CMOS is a very appealing technology for various IMT-2020 applications including small cell base station RF power generation. It can integrate analog, RF, and digital components on a single chip and benefits from being fabricated using semi-standard CMOS processes. It has low power consumption, can integrate on-chip self-test and calibration functions, and can operate at frequencies proposed for IMT-2020. It’s not surprising that RF CMOS already used in virtually every Wi-Fi access point and Bluetooth transceiver.

Nevertheless, although RF CMOS has immense promise for base station RF power amplifier applications, it has a fairly long list of challenges that must be overcome. These include a low breakdown voltage, the difficulty of achieving high linearity, minimal RF-specific models, potentially higher development cost, a large footprint owing to the need for lots of inductors and transmission line, and others.

As a result, RF CMOS is not likely to displace GaAs where they compete as GaAs is a far more mature RF semiconductor technology, and can also operate at frequencies being considered for IMT-2020, also achieved broad bandwidths, and can produce greater RF output power. GaAs is also almost universally used as the source of RF power for smartphones.

Like RF CMOS, SiGe BiCMOS allows analog, RF, and digital circuits to be integrated on a single chip, is fabricated using slightly-modified silicon processes, uses digital design libraries and design methodologies, and can scale to achieve greater performance. SiGe is a standard technology in all smartphones and many other mobile devices mobile devices as well as Wi-Fi access points and Bluetooth transceivers. It’s capabilities in 60-GHz phased array antennas have already been demonstrated. It’s cut-off frequency (Ft) is greater than 240 GHz and an experimental cryogenically-cooled device was recently fabricated using a 130-nm process and operated at 798 GHz. The same device operated at room temperature still raced along at 417 GHz.

IMT-2020 base stations will use all of the semiconductor technologies described in this article for RF power generation: LDMOS, GaAs, GaN, RF CMOS, and SiGe BiCMOS. In macro and small cells at frequencies up to about 4 GHz, LDMOS will continue to reign supreme for the time being although it will be challenged by GaN in the future, and GaN and GaAs will power small cells well into the millimeter-wave region. The real horserace is at frequencies considerably higher than 30 GHz where RF CMOS and SiGe BiCMOS will compete for use in the very-low-power small cells that will proliferate everywhere. Ultimately, RF CMOS and SiGe BiCMOS will probably both be winners, but the answer remains years away.