Drivers: The Critical Interface Between a Circuit and Its Load

Bill Schweber
"Driver" is one of many engineering terms that can have various unrelated definitions ("buffer" is another one). For programmers, it is usually a software module that enables the operating system to communicate with a peripheral device, such as a printer.

But for electronic systems and circuitry, a driver is a circuit that has specialized features and capabilities that allow it to be the physical interface between a source circuit—usually a low-voltage, low-current circuit—and a load that has specific, unique characteristics that must be met, in order to get the signal source to impose its "will" on the load, and without negative consequences.

A driver must provide these basic functions with respect to the load:

To accomplish these things, driver circuits use a variety of design configurations and techniques. Drivers are characterized in two ways: (1) by their architecture, such as an open-collector driver, push-pull driver or isolated driver (to name a few); or (2) by their function, such as a relay driver, line driver, video driver, piezoelectric driver or MOSFET driver. It can get confusing when the different terms are actually referring to the same function, but it is something that engineers just learn to accept. There are also drivers for interfacing signals of one technology with another, such as CMOS/TTL drivers.

A driver can be part of the component (usually an IC) that is supplying the signal which must reach the load. Alternatively it may be a separate, discrete component or IC that can supply the voltage and current which the source IC cannot deliver due to its process and design limitations. Also note that even if the driver is handling digital signals rather than analog ones, a driver is inherently an analog function, with all the issues that analog circuits deal with: a "digital" driver is really an analog driver that is optimized for performance in the on or off state, and not in the transition zone between them. Despite the prevalence of digital signals, many real-world applications naturally need analog drivers, such as for providing audio signals to a loudspeaker.

Start with the open-collector driver 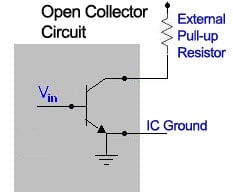 If the load is inductive, a snubber (commutating) diode is usually needed to provide a return path for the high-current or voltage "kick" that occurs when the load is suddenly switched off. Image source: Coilgun Systems In many situations, though, the load is not simply resistive, but has a large inductive aspect; relays and motor coils are good examples. This causes problems for the simple driver, because when the load is switched off, the collapsing magnetic field creates a large reverse-voltage transient, which may damage the transistor. To overcome this, a driver for inductive loads may add a snubber or commutating diode to limit the transient "kick," Figure 1b. If the driver needs to both source and sink current, one approach is a push-pull circuit; this one uses a single supply, but other versions that use a bipolar supply are widely used. Image source: National Instruments Corp. Note that the open-collector topology can only sink current, with current going from the supply rail to ground. If the load needs current sourcing as well as sinking, a push-pull driver can be used, Figure 2. Here a complementary pair of transistors is used, often with a bipolar supply (positive and negative), with one transistor sinking current from the load to ground or a negative power supply, and the other sourcing current to the load from a positive power supply.

The open-collector and push-pull drivers are just two of many driver designs, and they are also the basis of drivers that are carefully tailored to meet the needs and constraints of specific applications.

The cable or line driver is optimized for that one task; here a Maxim MAX4142 drives a balanced, twisted-pair line to the MAX4144, and theMAX4144 then drives a single-ended, 75-ohm coaxial cable. Image source: Maxim Integrated The line or cable driver is needed to drive a load that can be twisted-pair wire, coaxial cable or another wire configuration, Figure 3. It must deliver enough current to the "line" at a sufficiently high slew rate so that it faithfully replicates the voltage signal at its input, despite any non-resistive aspects of that line. A line driver may handle analog signals such as traditional video, standard audio, or even amplified outputs from sensors and transducers (most of which are analog) or digitized signals, but it still must deal with the unavoidably analog nature of sourcing and sinking current into a load while reaching the designated maximum and minimum voltage levels. The driver may be "balanced" for cases when the line it is driving is not grounded, or single-ended for when one side of the line is connected to ground.

Cable drivers are also defined by the maximum frequency of signals they can faithfully convey into the load, which can range into the GHz zone. In some applications, the line driver may also have to withstand inadvertent connection to the power rail or a short-circuit to ground.

The MOSFET driver is the voltage or current interface between the control electronics and the MOSFET, and must be able to source or sink current into and from the MOSFET gate capacitance. Image source: Author The MOSFET driver is the interface between a low-level control signal and standard power component, used extensively in digital on/off mode in power supplies and motor control, Figure 4. The MOSFET driver typically needs to supply only about 15 V to the MOSFET to turn it on; that's the relatively easy part. What's much harder is that it must do so with the MOSFET gate as a capacitive load, with the amount of capacitance dependent on the specific device and its ratings: higher-power MOSFETs have higher-input capacitance. While almost any driver would eventually reach the target voltage, that alone is not acceptable for the MOSFET, which must be turned on within a specified, fairly short time (on the order of microseconds) for proper system performance.

Adding to the MOSFET-driver challenge is that it is not enough to turn it on properly; it must be turned off quickly as well. This means that the driver must go from its high-current-sourcing capability to a complementary high-current-sinking capability, to pull the current out of the MOSFET's gate and turn it off. If the turn-off takes too long, the MOSFET may "linger" in the transition region between on and off states. This may seem to be a minor issue, but it is actually quite critical. MOSFETs are used as the switches for an electronically controlled H-bridge, which can be directed to switch a motor to either direction of rotation. Image source: Infineon/International Rectifier Corp. The reason it is critical is not only for overall system performance and responsiveness. Many MOSEFTs are used in an H-bridge configuration, where the upper and lower bridge MOSFET must be in absolutely opposite states, Figure 5. If both are even a little bit "on" at the same time, there will be a short-circuit between power supply and ground, which can damage the system and the MOSFETs themselves. The driver must often provide galvanic isolation between signal source and MOSFET, especially in bridge configurations; here, the UCC21520 from Texas Instruments provides two isolated driver channels, making it a good fit for H-bridge configurations. Image Source: Texas Instruments There is yet another aspect of MOSFET drivers to consider: isolation. In many motor-driver configurations, including the versatile H-bridge, the upper MOSFET is connected between the supply rail and load, while the lower MOSFET is between the load and ground. This means that the upper MOSFET has no "ground" connection and it must be isolated from circuit ground. This is usually achieved by using an isolated driver, which has no galvanic path between its input and its output, yet responds to an input signal telling it to source current to and sink current from the MOSFET gate, Figure 6. The designer can build his or her own isolated MOSFET drivers using a non-isolated driver and separate isolator (usually an optocoupler or a pulse transformer), or can buy a single component that incorporates both driver and isolation functions.

There are good reasons for spending so much time on MOSFET drivers. First, MOSFETs are very widely used in power-related circuits. Second, there are many subtleties related to driving MOSFETs, which is why so many drivers are available for them. Third, MOSFETs come in capacities ranging from a few volts and amps to hundreds (and even thousands) of volts and amps, and their drivers must be sized accordingly. This is unlike the situation with line drivers, where there are only relatively few configurations, and usually they are at relatively low voltage and current. Also, MOSFET drivers must tolerate faults and failures at the MOSFETs or their loads, yet must not themselves be damaged. They must also prevent damage from "rippling back" into the low-voltage circuitry (processor, memory, I/O).

Finally, to fully illustrate the wide range of situations drivers must support, consider the specialized high-voltage

analog drivers for piezoelectric actuators. This actuator uses the well-known piezoelectric principle: when voltage is applied, the piezo crystal actually changes shape. (The reverse is true as well: when the crystal is squeezed, it generates a voltage.) For precision lab instrumentation or even robotic-surgical systems, sometimes a movement of only a few thousandths of an inch is needed, and with precision. (Piezo actuators are also used to generate the small, sudden "shock" that forces ink to squirt out of an ink-jet printer or a 3-D rapid-prototyping machine's nozzle.)

One way to create micro-motion would be to use a tiny motor with gears; but backlash, tolerance and teeth cogging would make this a very difficult design. Instead a high voltage is applied to a piezo crystal, which causes it to expand a tiny amount, typically on the order of 10 micro-inches for every inch of crystal length. That's small, but it is all that is needed for many specialized applications. This high-voltage driver circuit uses a pair of PA89 op-amps operating from bipolar ±530-V rails to drive the piezo motor element (center of figure) at up to ±1000 V. Image Source: Apex Microtechnology The piezo driver addresses the challenge by providing a drive voltage of several hundred to a thousand volts (fairly difficult to do), at very little current (easy to do). The additional complication is that the piezo element is a capacitive load, so sourcing and sinking even that small current at those high voltages demands a very specialized analog amplifier, Figure 7.

A driver's function is deceptively modest; it does not make decisions but, instead, it is charged with carrying out the signal and power decisions made by the system. Nonetheless it has a big responsibility to deliver sufficient voltage and current, at the needed slew rate for both sourcing current into the load, and sinking current out of the load. These loads may be simple, well-behaved, tightly confined resistive loads, or they may have highly inductive or capacitive aspects. They may also have issues with potential power or ground short-circuits, load failures, and other possible problems that the driver must address.

For these reasons, there are both general-purpose drivers as well as many carefully tailored, application-specific drivers to handle the range, type and complexity of signal sources and loads in general use today.