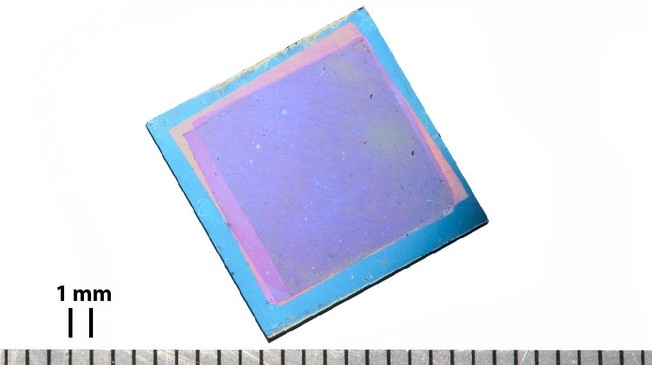 A microchip developed by scientists from EPFL and tested at the University of Geneva uses graphene to filter out unwanted radiation and could greatly speed up wirele ss data transmission. (Source: EPFL) tions.

Scientists from Ecole Polytechnique Fédérale de Lausanne and the University of Geneva have created and are testing a microchip that filters out unwanted radiation with the help of graphene that could allow future devices to transmit wireless data ten times faster. Moreover their microchip works in a frequency band that is currently empty, called the terahertz gap.

Graphene is both opaque and transparent to electromagnetic waves, a remarkable property that can be used in future wireless devices to filter out unwanted signals for faster data transmission. 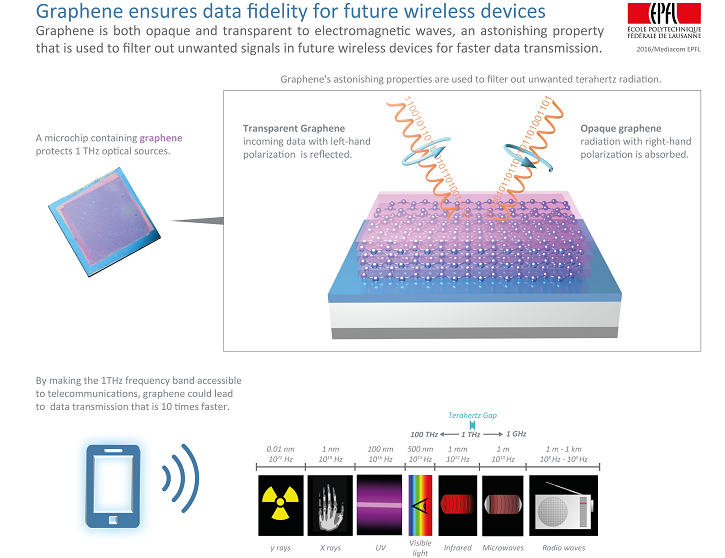 Graphene ’ s property of being both transparent and opaque to electromagnetic waves is used to filter out unwanted terahertz radi ation. (Source: EPFL) As explained by its developers, the new graphene-based microchip works by protecting sources of wireless data from unwanted radiation, ensuring that the data remain intact by reducing source corruption.

The graphene content in the microchip filters out radiation in much the same way as polarized sunglasses. The vibration of radiation has an orientation. Like polarized glasses, the graphene-based microchip makes sure that radiation that only vibrates a certain way gets through. In this way, graphene is both transparent and opaque to radiation, depending on the orientation of vibration and signal direction. The Swiss researchers used this property to create a device known as an optical isolator.

Moreover the microchip works in what’s known as the terahertz range, a frequency band that is currently undeveloped. Terahertz radiation falls in between infrared and microwave radiation in the electromagnetic spectrum.

Today’s electronic devices transmit data in the gigahertz range, which has its technological limitations. Many scientists believe that if this terahertz bandwidth can be exploited, it would unlock the door to much faster smartphones, tablets and wireless communications in general. Not only could data transmit faster, but device users would experience better sound and image quality as well.

The researchers believe the new microchip addresses this unmet need and will bring terahertz technology another step closer to reality.