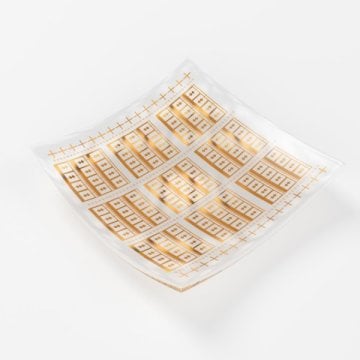 With the help of the two-dimensional material graphene, the first flexible terahertz detector has been developed by researchers at Chalmers. The opportunities are great within health, the internet of things and for new types of sensors. Source: Product Design Studio, Gothenburg/Chalmers University of TechnologyA group of researchers at the University of Chalmers in Sweden have developed, for the first time, a flexible terahertz detector using graphene transistors on plastic material substrates. The development can be used in applications that require flexible electronics, sensor networks and wearable devices.

Terahertz radiation is defined as electromagnetic waves with frequencies ranging from 1,000 gigahertz to 10 terahertz. Until now terahertz detectors, and devices of these frequencies in general, were difficult to build for simple applications mainly because of the weight of the devices.

Now Xinxin Yang, Andrei Vorobiev, Andrey Generalov, Michael A. Andersson and Jan Stake, all Chalmers researchers, with the help of advances in polymer technology, have the first ever flexible terahertz detector. The detector has unique features:

The results of the research were published last week in the Applied Physics Letter journal and ccan be read here.