VectorNav Technologies has introduced the VN-360 GPS-Compass heading and position sensor. Designed for original equipment manufacturers, the VN-360 provides an accurate, true-north heading solution that functions as a reliable alternative to magnetic-based sensors. 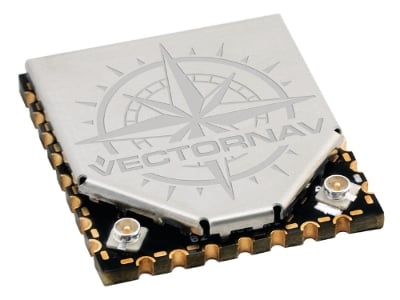 Many systems currently available on the market depend on digital magnetometers to resolve heading measurements to be used by a manned or unmanned platform. However the majority of these platforms (such as multi-rotor UAVs, ground robots or satellite antennas) also include ferrous materials, motors, batteries or electrical components that drastically limit the ability of a magnetometer to provide an accurate or reliable heading solution. VectorNav's VN-360 provides a miniature, cost-effective Global Positioning System (GPS)-based alternative that is unaffected by these magnetic disturbances or by other changes to the magnetic environment.

Incorporating two on-board global navigation satellite system (GNSS) receivers, the VN-360 calculates the relative position between its two GNSS antennas to derive a heading solution that is an order of magnitude more accurate than a magnetic compass. It supports a variety of GNSS antennas that can be mounted on the host platform with a separation distance anywhere from a few centimeters out to several meters. This distance can be configured to provide optimal start-up time, outputting an accurate heading solution typically within two minutes or less.