Researchers from ETH Zurich in Germany have leveraged 3D printing technology to create a new type of transparent electrode, which takes the form of a grid made of gold or silver "nanowalls" on a glass surface. Electrodes are used in many of the devices we use on a daily basis – required for the touchscreens on smartphones, ticket machines or ATMs. The glass surfaces of these devices are coated with a barely visible pattern made of conductive material that allows the devices to recognize the touch and location of fingers on the surface.

Dimos Poulikakos, Professor of Thermodynamics at ETH Zurich, and his team of researchers created the new electrode with walls so thin that they can barely be seen with the naked eye, marking the first time that scientists have created nanowalls like these using 3D printing technology. According to the team, the new electrodes have a higher conductivity and are more transparent than standard ones used in smartphones and tablets today that are made of indium tin oxide. The more transparent the electrodes are, the better the screen quality will be, and the more conductive they are, the quicker and more precisely the touchscreen will work. 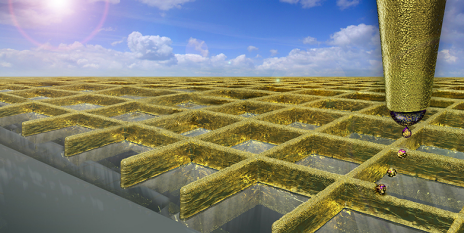 "Indium tin oxide is used because the material has a relatively high degree of transparency and the production of thin layers has been well researched, but it is only moderately conductive," says Patrik Rohner, a PhD student. In order to produce more conductive electrodes, the ETH researchers opted for gold and silver, which conduct electricity much better. But because these metals are not transparent, the scientists had to make use of the third dimension. ETH professor Poulikakos explains: "If you want to achieve both high conductivity and transparency in wires made from these metals, you have a conflict of objectives. As the cross-sectional area of gold and silver wires grows, the conductivity increases, but the grid's transparency decreases."

The team decided to use metal walls that were only 80 to 500 nanometres thick and since they are two to four times taller than they are wide, the cross-sectional area is higher, which means higher conductivity.

The researchers employed a printing process called Nanodrip to create the tiny metal walls. The scientists used inks made from metal nanoparticles in a solvent and an electrical field drew out ultra-small droplets from the metallic ink. The solvent evaporated quickly which allowed for the creation of the structure, drop by drop.

The team, in conjunction with ETH spin-off company Scrona, will further develop the printing process so that it can be used on a larger, industrial scale. Once they can bring it up to a larger scale, the team feels that the technology will offer a cost-efficient method of producting touchscreens.

Another application they are looking into is use in solar cells, where transparent electrodes are required. The more transparent and conductive they are, the more electricity that can be harnessed.