A Robot is Helping NIST with Its Measurements

The National Institute of Standards and Technology (NIST) has been looking for new antenna measurement method for years, and may now receive all the help it needs from a robot capable of extending measurements to higher frequencies while characterizing antennas faster than previous methods. 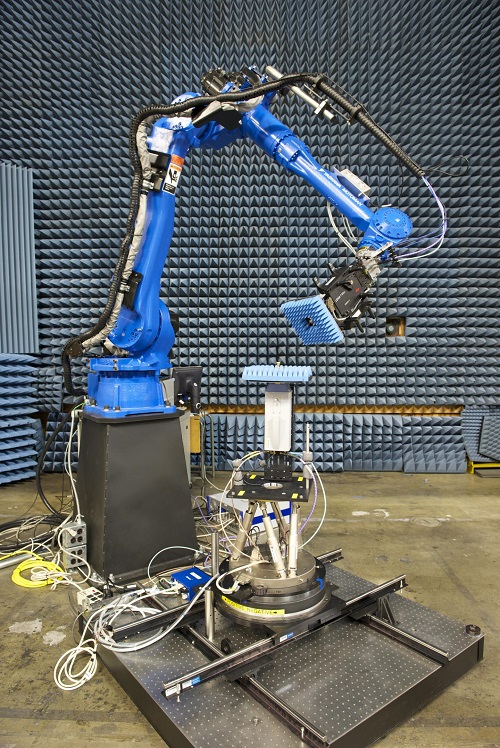 NIST's latest antenna range relies on a robot to measure virtually any property of any antenna for applications such as advanced communications. (Source: Suplee/NIST)

NIST is only working with the arm of a robot, the kind used in manufacturing facilities, to rapidly and accurately measure the properties of antennae used in advanced communications, remote sensing for weather prediction and climate monitoring, imaging systems and radar.

The researchers have been working on their helper, whose formal name is the Configurable Robotic Millimeter-Wave Antenna (CROMMA), for the past four years and now it has finally been approved to serve NIST customers.

"We designed this system to address a need in the antenna community for high-precision and configurable scanning at short, millimeter wavelengths," says Joshua Gordon, lead researcher. "Past systems haven't been as complete as they need to be. The robot allows us to explore many ways of doing measurements. There's a lot of configurability and an extremely high level of repeatability."

NIST is using the CROMMA, in conjunction with complex mathematical models, to determine antenna properties and calculate performance at long distances using data collected indoors close to the antenna, where it's easier to get accurate readings.

Near-field scanning allows researchers to assess the signal power transmitted or received to or from an antenna, polarization, and pattern.

CROMMA operates on six axes, so it can twist into unusual positions to measure the properties of a test antenna up to 6.6 feet in diameter positioned on a hexapod stage. Then, a laser tracker will monitor and records positions used for fine correction of robot postures to ensure the necessary precision.

The arm can hold up to 70 lbs. and measure antenna properties in almost any pattern, including the three popular paths: spherical, planar and cylindrical, which means the NIST team doesn’t need a separate antenna measurement setup for each path type.

To start, the robot will measure frequencies from 100 GHz to 300 GHz with the goal of eventually reaching 500 GHz and higher. High frequencies with short wavelengths of radiation are used in applications because they have improved spatial resolution, smaller antenna components and higher data rates. Right now there is a need for accurate antenna pattern measurements above 100 GHz, since this range may hold the key to the future of communication antennae, as well as more accurate weather predictions.