Antennas are used in all wireless systems from IoT devices to microwave and millimeter-wave imaging systems, such as radio telescopes. Antennas are the key element in a wireless system that converts electron flow to electromagnetic radiation in a symmetric manner that is carefully designed. The exact behavior of an antenna is related to the geometry of the conductors and dielectrics in its structure, and there are a wide variety of antennas to accommodate various application requirements.

When electrons produced by a time varying signal with sufficient high frequency components pass through a conductor that is not shielded, the result is the creation of an electromagnetic wave, or the antenna radiation. A specific distance away from an antenna where the electric and magnetic fields of the electromagnetic radiation pattern from the antenna are perfectly orthogonal is called the far field of an antenna. The parameters of an antenna are typically measured in the far field. The behavior of an antenna’s radiation is described by several key parameters, which are discussed in the following section. 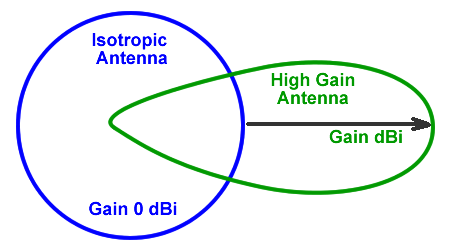 Front to back ratio

Antenna polarization is a description of the way the electric field (E-field) or magnetic field (H-field) of a wavefront oscillates. If the field lines oscillate within a single axis, they are known as linearly polarized. A linear polarized antenna may be horizontal (0°), vertical (90°) or cross polarized if at an angle other than 0° or 90°. An elliptical polarization is when the field oscillations of the wavefront orbit around the origin and are either traveling clockwise (right hand elliptically polarized) or counterclockwise (left hand elliptically polarized). As a special case of elliptical polarization, the E-field lines may perfectly rotate around the origin and form a circle, which is known as circular polarization.

It is important to have receiving and transmitting antennas with matched polarization, or some of the power of the signal will be lost due to the polarization mismatch. This is known as the polarization loss factor (PLF), which can be described with the equation:

The directivity of an antenna is the measurement of the highest amount of radiated power in a direction divided by the average power of an antenna radiated in all directions. Hence, a high directivity antenna will have a beam pattern that is very strong in a single direction, where an antenna with lower directivity will have greater amounts of beam energy outside of the main lobe. The envelope of an antenna may also be described in terms of the half power beamwidth, otherwise known as the 3 dB beamwidth. The 3 dB beamwidth is the angular width of the radiation pattern between the two points 3 dB below the peak beam. 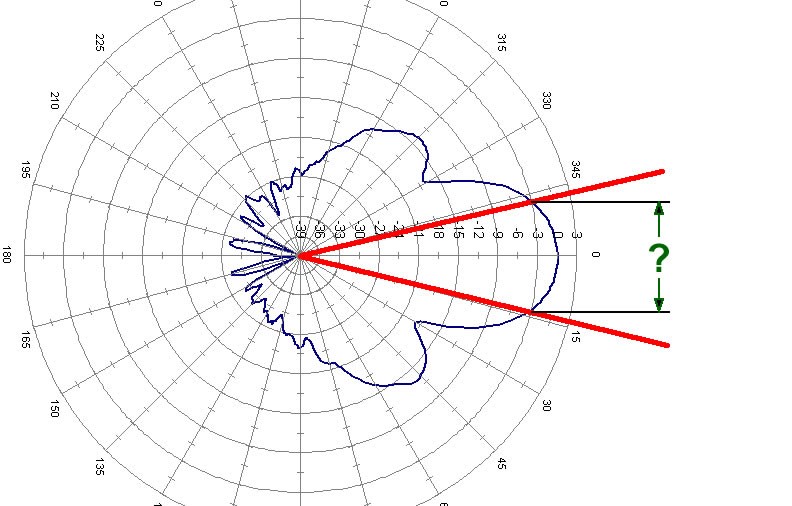 This is not to be confused with antenna efficiency, which is a ratio of the power input to an antenna compared to the amount of power radiated from an antenna. Efficiency is often given as a percentage, a decimal or in dB, but is just a ratio with a value between zero and one. Antenna efficiency should also not be confused with antenna voltage standing wave ratio (VSWR) or reflection coefficient, which is related to the impedance match of the antenna ports to the interconnect and/or source. An antenna may be measured in terms of total efficiency, which is merely a multiplication of antenna radiation efficiency and loss from impedance mismatch.

Antenna factor, or antenna correction factor, is a ratio of the incident electromagnetic field to the output voltage from the antenna and the output connector. The antenna factor is a function of frequency, and the relationship between voltage developed at the antenna port and an antenna’s radiated field intensity is important for radio frequency interference and electromagnetic interference (RFI/EMI) and antenna characterization.

Near field vs far field

The antenna parameters discussed previously are all given for an antenna’s far field. Within a few wavelengths of an antenna, however, the behavior of the electromagnetic radiation around an antenna is quite different. The near field is composed of two regions, the non-radiative (reactive) and the radiative (Fresnel) region. The reactive region, the electric and magnetic field strength decrease by the inverse cubed law with distance, compared to the radiative region decreasing as an inverse square law with distance. Hence, the near field drops off much more rapidly than the far field and is only relevant for antenna systems with objects in near proximity to the antenna.

The VSWR, also known as standing wave ratio (SWR), is the ratio of the maximum voltage and minimum voltage of a standing wave developed at the port of an antenna. For the most efficient transmission and reception, an ideal antenna has a VSWR of 1:1. Any imperfection in the antenna design or antenna port/feed that results in an impedance mismatch leads to a degraded VSWR where some of the RF energy is reflected from the antenna port and the transmitter/receiver ports.

Where Γ is the reflection coefficient, Vz is the voltage standing wave voltage.

Though useful as a minimum specification for pass/fail quality control, VSWR does not account for how well an antenna radiates the power supplied to it. Hence, further radiation testing is necessary to determine if an antenna is operating properly. VSWR tests can, however, provide evidence that an antenna may not be tuned properly, or some aspect of the antenna interconnect is faulty.

In the case of antenna arrays, multimode antennas or multipolarized antennas, there will be some electric and magnetic coupling between the antennas or ports. The isolation between the elements is a measure of the signal strength in a given element and the strength of that signal coupled into another element. The isolation is usually given as a worst-case figure, but often must be characterized in order to implement multi-input multi-output (MIMO) or beamforming algorithms.

This article provided a basic discussion of common antenna parameters, both radiation and network parameters. With this knowledge a reader should be able to better evaluate the viability of an antenna for a given application. For more information on antennas, visit the AH Systems website.

The Importance of Antenna Beamwidth in RF Testing