Smart buildings have been talked about for several years and some advances have helped considerably to improve energy efficiency, safety and convenience. Smart buildings can even adjust for occupancy, time of day and use both active and passive techniques to keep temperatures and lighting levels optimal. Security has significantly improved with intelligent security cameras, material and personnel tracking and adjustable security levels based on the time of day and building area.

These improvements have made building smarter, but not really intelligent. Intelligence requires access to large amounts of data, as well as algorithms that can take the seemingly random data points and make some sense out of them. Buildings that are intelligent, maybe even more intelligent than us, could significantly improve efficiency, quality of life and reduce operating costs.

Building in Intelligence from the Ground Floor Up

Intelligent buildings will need massive amounts of data to operate intelligently. The rapid deployment of sensors and meters will provide a significant amount of data, of the kind needed to operate intelligent buildings. Modern meters are adding communications capability, often wireless, to simplify data storage and analytics in the cloud. A recent IHS study shows a projected growth of communicating meters from 132 million in 2015 to 150 million by 2019. All these devices will feed the cloud with massive amounts of data and algorithms will turn these data streams into intelligence that building management systems will be able to act on. Let’s look at an example of how an intelligent building might be able to react in an emergency to help save lives.

Newer buildings in earthquake zones are adding innovative foundation structures that can react to vibrations during an earthquake. These structures have more ‘give’ than traditional buildings and can react to vibration events without losing structural integrity. The ability to make dynamic adjustments to building flexibility settings on a building can retain structural integrity even when large vibrations are involved. Combining an adjustable dynamic foundation with real-time sensor readings from all over the building can provide a much smarter solution.

It is possible to make the building even smarter, perhaps even intelligent. You might have noticed that it is very difficult to test this system out, without an earthquake present. Small vibrations, over months or years, might provide additional data that could be used to tune the response in an actual emergency. Going one step further, perhaps sensors in identical building, in different parts of the world, could collect data during an earthquake and the data and the buildings response could provide even more appropriate data. That data could be used to dynamically adjust and optimize building response during an actual earthquake.

This pattern of using local data for smart implementations, but expanding the data set to much wider sources is the first step in building intelligence. The next step relies on improving the algorithms, making them more intelligent, with dramatically improved capabilities. The cloud can provide both the storage for these massive data sets and the computing power to ‘fish’ through all the data to find the underlying patterns and improve the algorithm, and thus the intelligence. This approach can be used for any number of similar systems, not just dynamic structures.

Let’s look at another intelligent building example, one less catastrophic. Energy efficiency is an increasingly important aspect of reducing building cost, and smart buildings can adjust to environmental changes to reduce power use. Changing heating, ventilation and air conditioning levels based on the time of day resulting from passive heating and cooling and even occupancy levels is becoming a common feature of smart buildings. Intelligent buildings would make adjustments based on historical data, captured from sensors located throughout the building. These buildings might even use data from the company scheduling program to identify opportunities to plan ahead. For example, the system might adjust the room temperature in the central conference room prior to the big company meeting. Gradual adjustments are much more energy efficient than ‘extraordinary’ changes when large temperature changes and large amount of air flow is used.

From the above example, we can see that historical data can be used to add intelligence to smart systems. By tracking the company schedule and identifying patterns of previously ‘expensive’ energy use, a modified heating algorithm could be used to lower energy use. As an extreme, perhaps the company meeting might even be used to generate heat if it was schedule for the beginning of the day (and the topic was exciting enough). Who knows what other capabilities could evolve when buildings can access all the relevant data to a particular function. 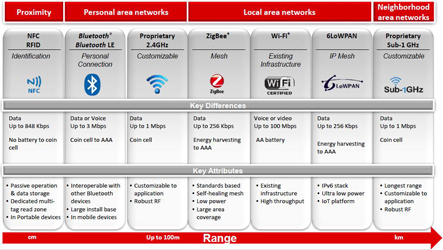 Figure 1: Wireless connectivity standards. Image credit: Texas InstrumentsClearly pervasive wireless connectivity between sensors, meters and controllers are at the heart of creating the intelligent building. Fortunately, MCUs with on-chip wireless communications capabilities have recently come on the market. These devices can usually connect over short ranges, from tens of meters to hundreds. Wireless modules can connect event further, over a kilometer, and when used in conjunction with an MCU can provide the long reach needed to connect smart buildings into an intelligent system. Figure 1 shows some of these wireless standards and their key differences and attributes.

MCU implementations with wireless connectivity can be optimized for a single standard or can support multiple standards. The Texas Instruments SimpleLink multi-standard CC2650 Wireless MCU can address multiple 2.4 GHz standards for Bluetooth Smart, ZigBee, 6LoWPAN and ZigBee RF4CE. These types of devices have an on-chip radio frequency (RF) core and a digital signal processing (DSP) modem that can adjust the protocol based on the selected wireless standard. The traditional MCUs main CPU and peripherals allow the device to connect to a variety of sensors and meters and to communicate key information via the wireless standard. An example of this type of implementation is shown in Figure 2.

Given the large number of standards available for wireless connectivity, it would seem that a flexible implementation is desirable. At times, a single 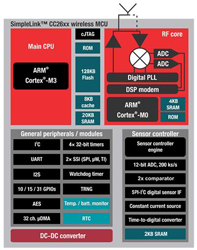 Figure 2: Multi-standard wireless MCU architecture example. Image credit: Texas Instrumentsstandard is required; however, the additional overhead that a flexible implementation requires can increase power and cost. Devices that must use battery power, for example, can benefit significantly from a single standard implementation. Even the ‘lowly’ eight-bit MCU, like the Atmel ATmega2564RFR2, seen in Figure 3 below, has added wireless capability on-chip for a low-power short-range solution to inexpensive sensor applications. 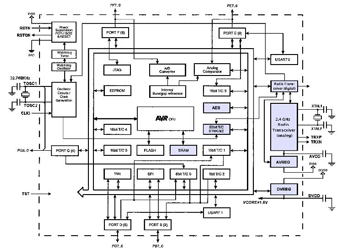 Figure 3: Even eight-bit MCUs are adding wireless capability. Image credit: AtmelMCUs with on-chip wireless communications capability will provide the data needed to feed the evolution of smart buildings into intelligent ones. However, the massive amounts of data these devices can deliver is just the start. Cloud-based storage and computing and most importantly algorithm tuning and learning will make the difference between smart buildings and really intelligent ones. Do not be surprised if the next new building you visit knows all about you. It may even know you have not had your morning coffee yet and could have it waiting for you at that meeting you are rushing to be on time for. Now wouldn't that be the intelligent thing for a building to do?