Carrier Aggregation: Nowhere to Go but Up!

Up until now, this series has focused primarily on the downlink side of carrier aggregation (CA) as we explore what CA is, how it is currently deployed and what is available now. The downlink side is also how the industry has typically focused on cellular technologies since before, most use cases (including but not limited to web browsing, email, app downloads etc.) are predominantly dependent on the downlink. However, with social networking, user-generated content and real-time applications such as video telephony, augmented reality and real-time gaming, this paradigm is changing and will continue to do so. Taking user-generated content as an example, the capture capability of today’s devices when compared to those in the hands of subscribers only four years ago have increased substantially. Video has grown from 720p capability to at least full HD if not 4k. Front and rear camera resolution have also increased from 1-5 megapixels (mp) to 8-16 mp. As such, it is now time for us as an industry to start thinking about the uplink and how we can improve performance to address these requirements now and into the future. This is where CA and the next steps for that technology come in.

As mentioned in the previous articles of this series, there are multiple levels of CA, which enable different categories of LTE user equipment (UE) capability. Typically, the higher the level of CA, the higher category of LTE UE is supported. However, CA levels are determined by not only the number of carriers that can be aggregated, but also the total bandwidth of those carriers. For example in the downlink, assuming one of the more common modulation schemes being used (64-QAM or quadrature amplitude modulation), every 20MHz of aggregated bandwidth theoretically yields 150 Mbps of throughput. Previous articles of this series had focused on the downlink capabilities existing today. In this last issue of the series, as we explore what is next for CA, we will be focusing on the uplink capabilities of CA and how we as consumers use our devices really have nowhere else to go but UP. 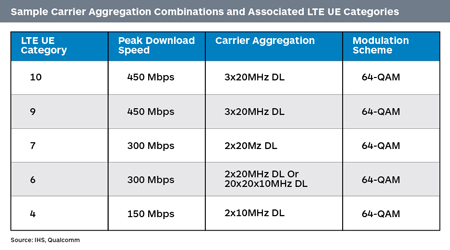 Uplink CA: How Fast Can We Go and How?

As exhibited in the table above, current levels of uplink CA are topping out at about 100 Mbps. However, new innovations are coming into the market that are starting to see the needle move up to 150 Mbps and more soon after that. In fact, the collective focus on this side of the link is such that the 3 GPP have found it necessary to split the UE categories to have independent classifications for the uplink and the downlink to help manage the ever-growing combinations of uplink (UL) and downlink (DL) capabilities.

The table below outlines the new categorizations for UL speeds:- 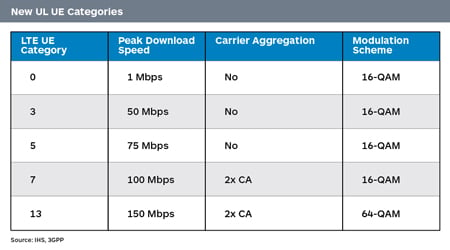 Increased throughput speeds in the UL supporting these new categories are being driven by not only UL CA, but also by increased modulation to 64-QAM. Up until Release 11, the UL topped out at 16-QAM. The higher order of modulation that 64-QAM enables essentially provides an increase in throughput by increasing the number of bits transmitted per symbol. While UL CA does require hardware modifications to both the UE and the LTE base station, 64-QAM support, in some cases, does not and only requires firmware upgrades. This distinction is causing a decision point to be made by mobile network operators or MNOs on whether or not to get the speed increases by simply upgrading to support 64-QAM—a seemingly easier and more cost effective option. However, looking deeper into the benefits and actual performance increases enabled by both innovations, it is clear that in order to maximize the effects and return on investment of enhancements promised by both, the ideal implementation is to deploy 64-QAM upgrades on top of UL CA. In a later section of this article, this decision point will be explored in more detail.

Either way, it is clear from the table above that even with the increased focus and planned enhancements, the UL will still be far behind downlink speeds. This is partially due to the headstart that the DL has had, but also due to physical limitations in the UL. One such limitation is the maximum transmit power of the UE when compared to the eNode B or LTE base station. Due to the UE being mobile and battery operated, it inherently will not and cannot have the same transmit power available to it that the LTE base station has being connected to the main power grid. This transmit power limitation will always be a limiting factor to how fast we can go in UL, but it can be partially offset by more dense network topographies where the UE will more often be closer to the LTE base station or potentially using mobile hotspots instead of smartphones as the UE of choice for certain applications. In the case of the latter, it is because mobile hotspots do not have to deal with other space and power consuming components such as the display, consequently allowing for larger batteries as well as more power to be allocated to the modem.

Due to the inherent increase in throughput achieved by moving from 16-QAM UL modulation to 64-QAM modulation, there is debate amongst some MNOs whether that is enough to meet their needs or if they should do both an upgrade to 64-QAM as well as UL CA support. Conceivably, in certain situations, depending on existing deployed equipment, only doing a 64-QAM upgrade could save some short term capital expenditures. However, when looking deeper at the situation, it becomes clear that in order to maximize the return on investment from implementing upgrades to begin with, as well as optimize the network to reduce total cost of ownership, deploying both UL CA as well as 64-QAM is required.

As a result of the physics governing quadrature amplitude modulation (QAM), moving from 16-QAM to 64-QAM requires not only better filtering at both the UE and the LTE base station, but it also requires cleaner channel conditions with better levels of signal to noise ratios or SNRs than does 16-QAM. As such, 64-QAM is really only effective close to the LTE base station where channel conditions tend to be of sufficient quality to allow for the higher order of modulation. Granted, because 64-QAM allows for shorter transmission times due to the higher throughput speeds, one could argue that this will lower the noise floor for the network (the noise in the signal to noise ratio), which would then allow for 64-QAM to be used further out away from the LTE base station. However, this is true due to the transmit power limitations with the UEs, there will still be a limit to how far out the UE can be and still benefit from 64-QAM. Benefits from UL CA can be realized across a larger footprint of the LTE base station. Yes, throughput speeds will still be less in the cell edge than closer to the cell center, but overall throughput gains are achieved across the entire cell footprint when compared to the same footprint without UL CA. Consequently, all subscribers in a given cell site footprint will experience better performance as opposed to only the few that are within the boundaries of 64-QAM effectiveness. While it is true that 64-QAM will yield network and user experience gains by itself, it will only do so for a subset of the customer base and is not able to fully realize potential network capacity gains. When the network is upgraded to both UL CA and 64-QAM, the inclusive nature of how the performance upgrades are realized maximizes the total impact on the network and user experience from optimized increased network capacity to longer UE battery life.

LTE Carrier Aggregation: Moving on UP!

As consumer behavior continues to shift the traditionally DL driven focus of the industry to a more balanced UL usage along with the ever increasing DL use, LTE networks and devices both have to adapt by adopting solutions that enable enhanced UL performance. The next releases of the LTE standard being implemented and commercialized allow for this with both UL CA and higher orders of modulation with 64-QAM support. Consumer demand for enhanced UL performance has thus far outstripped the industry’s ability to meet that demand and is now causing a technology pull instead of the technology push under which we as an industry have, until recently, been operating. As such, it is imperative that the industry use all available innovations and solutions for enhanced UL performance to help close this supply and demand gap in order to continue to drive user adoption.