Every morning, students at the Kongsgardmoen School in Kongsberg, Norway walk into classrooms filled with intensive energy light. The cool white light used during their first class, an automatically feature set that cannot be adjusted by teachers, aims to regulate stress levels, shake off sleepiness and naturally transition students and teachers into an active daytime mode. 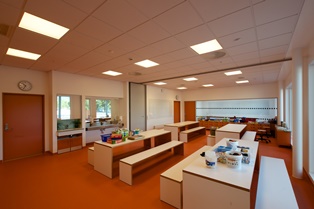 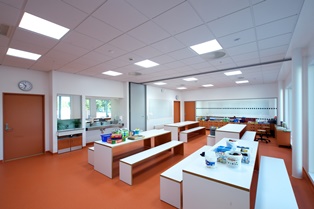 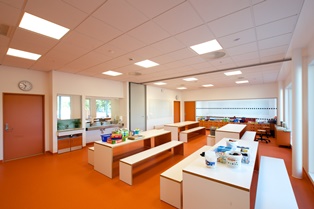 Images (above) shows the classrooms at Kongsgardmoen School in Kongsberg, Norway filled with intensive energy light for each different class lessons.(Click on image to enlarge)

Later on, the school’s standard neutral white light, known among teachers as “Everything Light,” with 3500 Kelvin color temperature, shines down on students going about their day doing routine tasks. After lunch when students’ energy level may be lower, a teacher on one side of the newly built building wants to do math drills, so she tunes into a cool white, intensive light for a maximum of 30 minutes to boost short-term student concentration and alertness. Down the hall, another teacher prefers to set a relaxing mood while reading to students so he adjusts the control panel for a warmer light setting.

Kongsgardmoen School, which houses about 280 first to seventh graders, is pioneering what lighting could evolve into the education space. The entire school, including its 14 classrooms, kitchen and gym, is equipped with tunable lighting capabilities, giving teachers the freedom to use various light temperatures as school-day activities change. The installation is considered by some to be the most comprehensive human-centric lighting LED installation to date, and is being replicated by other schools, including two in Iowa serving students with disabilities.

School administrators and teachers are still getting used to the new building and all the bells and whistles that come with it. They plan to develop with scientists and lighting experts, a more formal criteria to evaluate how lighting changes can affect students learning. For now, only a few weeks into the new school term, early successes comes in the form of anecdotes.

“It’s been fun to use in the classroom. If I change the light temperature, the dynamic in the classroom changes almost immediately as well. When I say to the students, ‘Okay, it’s time to calm down,’ and then turn on the warmer lights, within in a few minutes the kids are much calmer,” says Josh Roots Morland, who teaches English and music. He says he intends to test the cooler light settings later in the school year when his older students will need to concentrate on composing music and finding rhythm patterns.

“I don’t know if it’s a psychological thing or a lighting thing, but I say, ‘Bring it on,” Morland says.

Developing the Use Case

These kinds of examples will likely usher in other similar projects as local school boards consider replacing traditional fluorescent bulbs and measure expectations of regular LED rollouts vs. circadian-based systems that use luminaires with adjustable white light.

“Schools and offices are some of the most obvious first-generation applications for human-centric lighting, as people tend to spend a lot of time there during the day. You also want to be able to change between different states of concentration, for example alert and concentrated during a lesson [or] relaxed or calm during a break,” says Fabian Hoelzenbein, an IHS analyst for lighting and LEDs. “Human-centric lighting promises to support this through changes in light temperature that mimic the naturally occurring changes throughout the day.”

IHS expects the worldwide lighting market for education to be about $4 billion in 2015. Hoelzenbein says he does not expect this segment to grow by a huge margin in the next five to 10 years because increased penetration of LED means longer lifetimes, which translates to less replacement frequency. He forecasts that the market may grow by around 25% to $5 billion in 2023, the end of IHS’ forecast period.

Even so, there is a clear difference between fluorescent and other incandescent, halogen or HID systems, and that may be something school officials factor into their decisions. 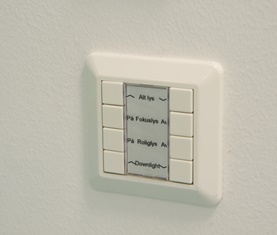 “Fluorescent systems are efficient at around 70 lumen/Watt (w), compared to about 10 lumen/w for halogen. High-end LED systems can have 100-120 lumens/w, so they are more efficient than fluorescent, but the increase is obviously vastly greater compared to halogen,” Hoelzenbein says. “For a switch from halogen to LED, I would expect around one to three years to recoup the initial investment costs, for a switch from fluorescent to LED this can be as much as five to 10 years. Apart from the environmental benefits, this should still be worthwhile money-wise, as LED lamps can last 20 to 25 years, but you have to take a very long-term view for that.”

Although HCL systems may be appealing options, the cost may be a barrier for many schools, several industry observers noted.

Additionally, the return on investment may be hard to quantify. Although the assumption is that students will be healthier and learn better with these systems (benefits that are difficult to put a dollar value on), most current evidence of human-centric lighting advantages are based on controlled lab studies, so the real world outcomes might vary, he says.

In Kongsgardmoen school’s case, the local council, which was exploring “normal” smart LED options for its new school building, green lighted the costly human-centric project based on the possibility of creating a better learning environment for the town’s children, says Morland. He notes that the region has become a bit of technology haven and that local officials are investing in various technology-based improvements. 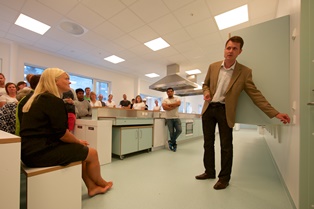 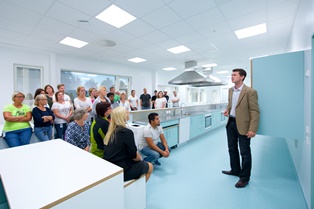 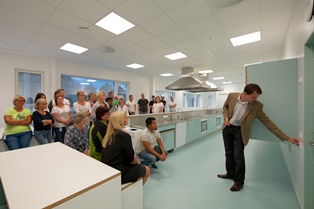 Images (above) shows Lars-Fredrik Forberg, a concept manager at Glamox Luxo Lighting explaining to the teachers on the use of lighting and its perspectives. (Click on image to enlarge)

This progressive mindset could inspire implementations in other places. However, since this kind of lighting has not reached commonplace and requires people to change their perspective of how lighting can be better utilized in different settings, some teach-the-teachers work must be done ahead of time, says Lars-Fredrik Forberg, a concept manager at Glamox Luxo Lighting.

“We showed the teachers the interfaces. We explained to them that some of features were automated, and others they could decide for themselves how to use,” Forberg says. “We knew if the teachers couldn’t understand how the system worked or became frustrated with it or misused the settings, then it wouldn’t matter how sophisticated the lights are or how much they cost because they won’t be used. In a classroom, when a teacher has many other things to control, if he or she perceives that the light panels aren’t working right or is a distraction, then they will give up on it.”

The luminaires used in the school are modular LED luminaires with diodes that shift the color according to pre-defined or manual settings, according to a Glamox release. The color rendering of the light is Ra >90, much higher than the minimum requirements for school lighting and making the coloring for reading and writing easier and more pleasant. The company says color tuning is controlled via a wall mounted user panel.

Meanwhile, halfway around the world in Des Moines, Iowa, similar stories are unfolding.

As part of a building renovation project and a mechanical and electrical upgrade, the Ruby Van Meter School, a special secondary school serving 180 students of varying ages who have moderate and severe disabilities, opted to replace fluorescent lights and install 22 classrooms with about six HCL fixtures each, notes Darrell Gierstorf, a construction analyst with the Des Moines Public Schools Operations team.

The goal was to “provide the best learning environment available,” Gierstorf says, adding, “Because of the students being special needs students, the ability to change the light coloration helps to change the environment in the classrooms.”

More specifically, the human-centric lighting project at Ruby Van Meter, and another Des Moines special needs school, Smouse Opportunity School, were selected because of research that has been done on HCL in special needs schools and “the possible benefits for those students appears significant,” says Mike Lambert, senior lighting designer at KCL Engineering. “We hope to learn from these projects how HCL might be used by other similar schools.”

According to Lambert, the fixtures communicate wirelessly to the wall control station that allows for either, manual dimming and CCT tuning or an HCL program that automatically varies over the course of a day. Auxiliary control devices, such as occupancy and daylight sensors can also be programmed wirelessly from the control station. The Kelvin range is 2700K–6500K and dimming is 0-100%.

As with the broader LED space, functionality within the HCL segment will also continue to evolve.

Some things that could impact future HCL trends will be the need for greater customization, and being able to adjust lighting to match people’s individual natural habits of either being a morning lark or a night owl, says Forberg. Along these lines, too, there is currently no universal standard for when and how much blue or cooler light can be added at any one time, and studies are still being conducted on how light impacts brain activity, behavior and what happens to circadian patterns when light is added too early in the morning or too late in the evening.

Work also needs to be done to better integrate the control systems and reduce complexity, he says, adding that the multitude of Internet of Things devices being introduced combined with increased demand for smart lighting systems could help address these issues.

Cost-effectiveness will come into play, too, as lighting providers and HCL users better understand what the real-world value translates into. Although LED have longer lifespans, increasing the Kelvin temperature for a couple of hours every day also means increasing energy consumption, for instance, and various types of luminaires and sensors will need to be purchased and installed to cover the range of color and activity changes in classroom settings.

Engineering Newsletter Signup
Features the top stories, latest news, charts, insights and more on the end-to-end electronics value chain.
This email is already in use. Please sign in here
Advertisement
Weekly Newsletter
Get news, research, and analysis
on the Electronics industry in your
inbox every week - for FREE
Sign up for our FREE eNewsletter
Get the Free eNewsletter
Advertisement
Popular News
1.
Biden: China lobbying against chip manufacturing bill
2.
The rise of LFP batteries in electric vehicles
3.
Congress to meet regarding CHIPS for America Act
4.
Audio giant Christie Digital to showcase latest technology at ISE 2022
5.
Deploying 5G networks with mmWave streetlight repeaters
Find Free Electronics Datasheets