Lithium Batteries: The Pros and Cons

Lithium-ion (Li-ion) batteries are essential to our energy-dependent lifestyle. In mobile devices or stationary ones, as rechargeable or non-rechargeable power sources, they are embedded in products ranging from tiny meters to aircraft. Without them, we would have bulky, heavy electronics with short runtimes, including wearables, smartphones, laptops, power tools, backup systems, EV/HEVs, and even the Boeing 787 Dreamliner. 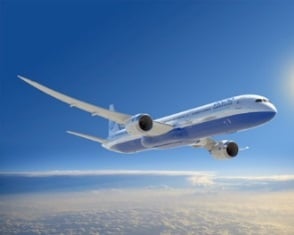 Yet, with so many things that make technology feasible, it is hard to live without them, and it is also hard to live with them. This dramatic indication shows why: on July 17, 2015, Boeing Co. issued a warning stating that flying bulk shipments of lithium batteries in passenger jets poses fire hazards, due to the high temperatures and explosive gases that can result when thousands of lithium batteries erupt in what is called a “thermal runaway.”

The warning covered both non-rechargeable units (known as primary batteries) as well as rechargeable ones (secondary batteries), whether charged or not. This was the first time the company has ever issued a formal, broad message explicitly urging passenger carriers to stop accepting large quantities of this power source as cargo, until better packaging and shipping procedures are in place.

Lithium batteries in bulk are known to be responsible for several aircraft fires and resultant crashes. To some extent, this unprecedented warning is redundant since 28 carriers had already imposed their own bans on bulk shipments of lithium batteries as cargo on passenger planes (according to the International Air Transport Association - IATA) and many have stopped accepting shipments of large numbers of lithium batteries even for their freighter airliners. The IATA has issued a set of detailed guidelines on transport of these batteries individually or in bulk, from tiny button cells to large battery packs, Reference 1.

Li-ion batteries have an energy density, measured by both volume and weight, which far exceeds other cell chemistries (strictly speaking, a "cell" is one electrochemical-based energy source; a "battery" is a group of cells packaged together as a single unit). As a result, designers and users get the best of all possibilities; lighter, smaller products with equivalent power and run time compared with other chemistries, or products of the same weight and volume but with greatly increased run time, or both.

Another advantage is that lithium is the most electropositive metal (i.e. it exhibits a high positive charge), so its batteries have inherently higher voltages than other types (approximately 3.6 V compared to 1.2 to 1.5 V for other batteries). This means that a single cell can be used in many designs, instead of a battery pack with two cells in series. Reference 2 has an informative explanation of the attributes of many battery chemistries (both lithium and non-lithium), which includes a detailed table of their typical specifications for multiple parameters, in addition to their energy density specifications.

One important point is that, despite the many benefits that lithium batteries provide, other battery chemistries are not obsolete. The venerable lead-acid battery has served reliably for over 100 years in various forms and applications, and it is still the battery that is used to start the engine and provide DC power in internal combustion cars. It is still the preferred choice due to its low cost, versatility, ease of management, well-defined behavior under charge/discharge cycles, and some unique technical characteristics in applications such as non-EV/HEV automotive; stationary power backup; deep-cycle for wheeled mobility (golf cars, wheelchairs, scissor lifts); and power-outage backup. Lead-acid is a forgiving and low-cost chemistry, and will likely be a major factor in the battery market for many years.

Rechargeable lithium-based cells require careful "care and feeding" in both their electrical and mechanical aspects. Electrically, they have to be charged along a specific profile, with the charge rate and mode (constant current and voltage) monitored and adjusted (Figure 1 and Reference 3), and their discharge profile must be within specific limits as well. Going outside the boundaries will have detrimental effects ranging from reduced capacity and run time (unpleasant but not dangerous) to overheating (very undesirable). 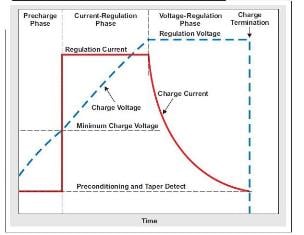 The battery management dilemma is obvious; something can go wrong with that controller, and failures can happen. If the controller is largely controlled by system software, processor and software reliability are considerations. Therefore, many designs opt to use a dedicated charge/discharge controller IC, with broad parameters set by an external processor; other designs prefer a dedicated IC that acts without any processor support at all.

Even non-rechargeable lithium batteries bring concerns. By definition, they are charged and therefore repositories of energy. Further, charged batteries do not have to be in a circuit which is charging them to ignite. There are documented cases of laptop computers catching fire when in their "off" state and not plugged in to a charger. These fires started when an internal manufacturing defect resulted in a low-resistance path within the battery cells, the cells then dumped a high-current pulse through the resistance, and the result was basic I2R dissipation, self-heating and ignition.

Lithium-cell ignition can also be triggered by non-electrical events, such as localized overheating due to inadequate ventilation and cooling. Even mechanical accidents can be dangerous; there is documented cases of these cells bursting into flames when being crushed by a seatback tray that closed on a laptop, as well as otherwise routine industrial mishaps.

Note that there is substantial confusion and sloppiness in terminology when discussing lithium-based batteries. There are many available variants of basic lithium-cell chemistry, plus lithium-polymer formulations where the electrolyte is embedded in a polymer fabric. Each has its own performance attributes related to capacity, density, charge/discharge curves and packaging issues, among other factors. Discussions about lithium often tend to blur all of these; in some situations, the lack of clarity is a non-issue, while in others, it makes a large difference.

Charged lithium batteries are dense concentrations of energy, and lithium is also a highly reactive element. As such, they can be triggered by known and unknown events to catch fire or explode. In addition to the obvious danger of such events, these fires are driven by the internal chemistry and are self-sustaining; they do not need oxygen to continue.

Compounding the problem, conventional fire-fighting techniques do not work. After a fire is put out using a Halon-based (not water) extinguishing agent, current U.S. and international safety documents call for dousing overheated batteries with water, and instruct firefighters to avoid picking the batteries up or moving them. Experts agree ice should never be used to cool a burning or smoldering battery, because it will serve as insulation and increase the likelihood of a flare-up.

Boeing's warning is especially noteworthy as they have considerable insight into the operation and risks of lithium battery packs. Their entire 787 Dreamliner fleet was grounded for over six months in 2012/2013 due to smoke and fires breaking out in the lithium battery pack, which is at the core of the electrical-power system in the aircraft (lithium was chosen, of course, to save precious weight and space). While no single cause of the problem was found despite an intense, high-profile investigation, it was most likely a combination of latent manufacturing defect, thermal runaway and other factors, Reference 4. The solution was a complex and costly aircraft retrofit consisting of additional monitoring safeguards, a fire-smothering case, and even a special venting system in case an over-temperature situation is detected, Figure 2. 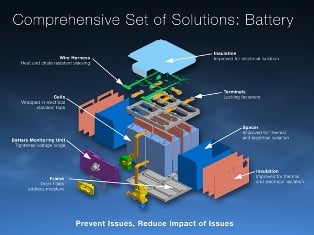 The fix to the Dreamliner battery overheating and fires involved more than just improved manufacturing quality control it required a major revamp of the battery system architecture and compartment (Option 1: from Boeing) 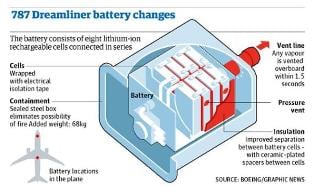 What is especially difficult and frustrating for users of lithium cells is that, there is no way to detect at the production-test stage some of the manufacturing problems that may surface later; the battery has no apparent problems and actually works as expected for days, weeks, or longer. It is analogous to a steel beam being used to support a large load. The only 100% assured way to test the quality of that beam is to test it to failure, rendering it useless. The user legitimately assumes that a beam from the same production batch has identical characteristics, but can never be 100% certain that a rare, random defect has not made its way into that sibling beam.

Are the risks posed by individual and bulk lithium-based batteries avoidable? Probably not, unless the laws of physics change. Are they unsolvable? Also probably not, as it is really a matter of asking "what risk level is acceptable?" and "what must be done to get to that level?". Keep in mind that our ubiquitous hydrocarbon fuels (gasoline, jet fuel, propane, among others) all have significantly higher energy densities and consequent volatility; gasoline's gravimetric energy density is about 100× that of a typical lithium cell and its volumetric density is about 25× as great. Yet despite these extremely high numbers, engineers and designers have learned to transform these fuels into sources with acceptable risks via appropriate design, installation, procedures and layers of safeguards.