Semiconductors, metals and insulators must be integrated to make the transistors for smartphones, computer and other microchip-enabled devices. These transistors are miniscule—a mere 10-nanometers (nm) wide—and are formed from three-dimensional (3-D) crystals. 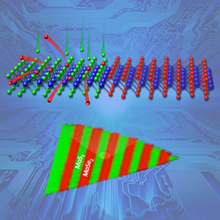 Researchers at the Department of Energy’s (DoE) Oak Ridge National Laboratory (ORNL) are investigating 2-D crystals made from common layered materials to constrain electron transport within just two dimensions. They are combining a novel synthesis process with commercial electron-beam lithography, creating arrays of semiconductor junctions. These patterns are arbitrary and are within a single, nanometer-thick semiconductor crystal.

Previously, researchers lithographically patterned single layers of graphene into ribbon-like ‘wires’ complete with insulation provided by a similar layer of boron nitride. However, the synthesis and processing methods to lithographically pattern junctions between two different semiconductors within a single nanometer-thick layer to form transistors—the building blocks of ultrathin electronic devices—have been missing.

However, they have found a new method that relies on transforming patterned regions of one existing, single-layer crystal into another. The steps involved were to first grow single, nanometer-thick layers of molybdenum diselenide crystals on substrates, and then deposit protective patterns of silicon oxide using standard lithography techniques. The exposed regions of the crystals were then bombarded with a laser-generated beam of sulfur atoms. The sulfur atoms replaced selenium atoms in the crystals to form molybdenum disulfide, which has a nearly identical crystal structure.

The results were published in Nature Communications as ‘Patterned Arrays of Lateral Heterojunctions within Monolayer Two-Dimensional Semiconductors’.

"We chose pulsed laser deposition of sulfur because of the digital control it gives you over the flux of the material that comes to the surface," says researcher Masoud Mahjouri-Samani. "You can basically make any kind of intermediate alloy. You can just replace, say, 20% of the selenium with sulfur, or 30%, or 50%." David Geohegan, leader of the study, adds, "Pulsed laser deposition also lets the kinetic energy of the sulfur atoms be tuned, allowing you to explore a wider range of processing conditions."

By controlling the ratio of sulfur to selenium, researchers can tune the bandgap of the semiconductors, an attribute that determines electronic and optical properties. Next, the researchers will see if their pulsed laser vaporization and conversion method will work with atoms other than sulfur and selenium.