See-through electronic devices, like transparent displays, smart windows and concealed circuits, require completely translucent components if users can digitally interact with their perceived surroundings and manipulate this information in real time. KAUST researchers have devised a strategy that helps to integrate transparent conducting metal-oxide contacts with 2D semiconductors into these devices. 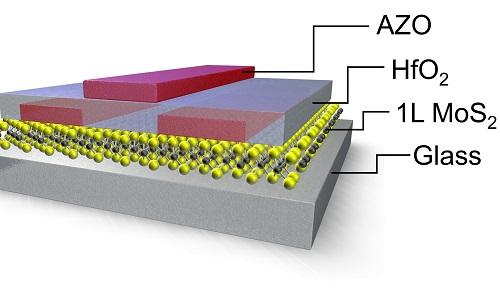 Ultrathin semiconductor sheets that are composed of transaction metals associated with chalcogen atoms, like sulfur, selenium and tellurium, present exceptional electronic properties and optical transparency. But, to date, incorporating molybdenum sulphide (Mo52) monolayers into circuits have relied on silicon substrates and metal electrodes, like gold and aluminum. The opacity of these materials has stalled attempts to develop fully transparent 2D electronic devices.

The KAUST team, led by material scientists Xi-Xiang Zhang and Husam Alshareef, has combined MoS2 monolayers with transparent contacts to generate a series of devices and circuits, like transistors, inverters, rectifiers and sensors. The contacts consisted of aluminum-doped zinc oxide (AZO), a low-cost transparent and electrically conductive material that may soon replace the widely used indium-tin oxide.

"We wanted to capitalize on the excellent electronic properties of 2D materials while retaining full transparency in the circuits," explains Alshareef.

According to Alshareef, the researchers grow the contacts over a large area by atomic-layer deposition, during which individual atom layers precisely accumulate on a substrate. Their main difficulty was to also form high-quality MoS2 monolayers on silicon-based substrates over a large area.

"We overcame this by using an interfacial layer that promotes MoS2 growth," says Alshareef.

The team developed a water-based transfer process that moves the as-deposited large area monolayers into a different substrate, like glass or plastic.

The researchers then deposited the AZO contacts on the transferred 2D sheets before manufacturing the devices and circuits.

The resulting devices outperformed their equivalents equipped with opaque metal contacts, like gate, source and drain electrodes, which demonstrates the high compatibility between transparent conducting metal-oxide contacts and MoS2 monolayers.

"Additional circuits are planned that will help demonstrate that our approach is robust and scalable," says Alshareef.

A paper on this research was published in Advanced Functional Materials