VeriSilicon Holdings Co. Ltd. (Shanghai, China), a Chinese fabless chip company with a design service, IP licensing and chip delivery business model, has filed to raise $75 million from an initial public offering of shares on the NASDAQ market. This is despite the fact that the company made a net loss in the first half of 2014.

The company, describes its business model as Silicon Platform as a Service (SiPaaS) saying that it can provide services across the semiconductor value chain from design to delivery of chips by supplying intellectual property and design and outsourcing for manufacturing services as appropriate. With this model it serves fabless chip companies and so-called ODMs (original design manufacturers) and OEMs (original equipment manufacturers) working in the areas of smart phones, tablet computers, HDTVs, set-top boxes, DVD players, home gateways, networking and data centers.

VeriSilicon claims that it is serving a growing trend towards the increased outsourcing of increasingly complex designs at the leading edge that involve large amounts of software as well as hardware development. The move to service extends the trend towards supplementing internal development with external EDA tools and licensed IP cores, the company said. 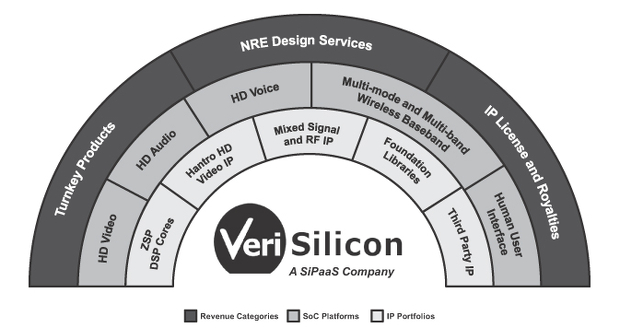 Verisilicon supports 180nm to 28nm CMOS and 28nm fully depleted silicon on insulator (FDSOI) manufacturing processes with standard cell, memory compiler and I/O libraries and third-party IP. Indeed, VeriSilicon states that it established a task force to study FDSOI in 2011 and has conducted a benchmark comparison of ARM processor cores across 28nm FDSOI and 28nm bulk CMOS manufacturing processes. "As a result, we are a leader in IP and design experience with FDSOI technology," the company said in the F-1 filing.

The company was founded in 2001 and has been backed by numerous venture capital firms having raised more than $100 million since its formation. The most recent tranche of funding was $22 million raised in June 2014, according to a separate Security Exchange Commission filing. Investors in the company include Austin Ventures, Sierra Ventures, Vantage Point Venture Partners, Walden Riverwood Ventures, Pudong Science and Technology Investment and Jovial Victory Ltd.