It has been a busy few days for Freescale Semiconductor and the Internet of Things (IoT).

During the recent ARM TechCon, the chip company helped to launch the Internet of Things Tomorrow Tour – a 20,000 mile road trip in a truck trailer retrofitted with 120 IoT products that will go cross country – and now it has unveiled a IoT gateway reference design in collaboration with TechNexion for a wide variety of next-generation devices.

Marcel van den Heuvel, CEO of TechNexion, said in a statement the IoT gateway provides “customers a ready-made platform that can fast-track their IoT application to market.”

The IoT gateway is available now from Freescale for $429.

The solid-state RF power devices are designed to withstand harsh RF heating environments without performance degradation, Freescale said. These solid-state devices would replace traditional magnetron technology in microwaves that relies on an on-off control function whereas the solid-state devices enable a more effective use of energy that allows RF energy to be controlled, enabling the possibility for new oven shapes, sizes and functionalities, Freescale said. 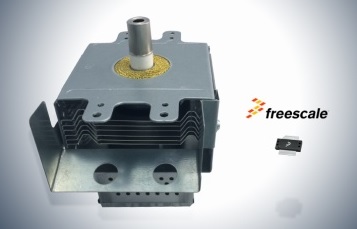