Despite what would seem like a no-brainer in terms of heightening security and fighting international crime, politics will hamper the rise in ePassports to just 175 million units by 2019, according to a new report from IHS Technology.

The report details that ePassports are set for relatively weak growth in shipments in the coming years despite continued need and desire for added security at airports, border crossings and other high population centers. Global shipments of ePassports will reach 175 million units by 2019, up from 113 million in 2013, representing a compound annual growth rate (CAGR) of 7.6 percent during the six year forecast period, as shown in Figure 1. 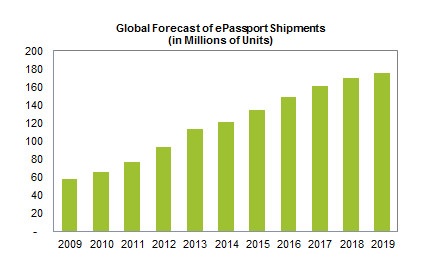 ePassports take the place of traditional paper passports by adding a microcontroller chip that contains biometric information – such as facial, fingerprint and iris recognition data – to authenticate a user’s identity. The technology is similar to that used in contactless smart cards, allowing for wireless data transfer of ID data.

“Programs utilizing ePassports face a host of challenges, including government legislation, country risk, political opposition and economic concerns,” said Wincey Tang, digital ID& IT security analyst at IHS, in a statement. “This multitude of obstacles is slowing the growth of ePassports compared to other electronic ID systems. The major question is whether the need for improved border security will ever be strong enough to overcome the challenges created by these barriers.”

While some countries are bogged down by red tape, other countries are embracing ePassports, specifically Australia where a majority of the passports will contain a microchip by the end of 2015, IHS said. Other countries including Austria, Denmark, Italy, Malaysia, the Philippines and Hong Kong have all jumped on the ePassport bandwagon.

IHS said that overall, the Asia-Pacific region accounted for the highest number of ePassport shipments in 2013, with 40 percent of the global market share. Europe followed with 32 percent market share with the Middle East and Africa representing the smallest regions for ePassports.