The market for chips used in industrial electronics was $8.61 billion in 1Q14, up 0.6 percent from the fourth quarter of 2013 and a robust increase of 17.5 percent from the first quarter of 2013, as shown in the attached figure. Although the growth in the first quarter was less than 1 percent, the expansion was achieved during a quarter that usually sequentially down on the previous quarter. 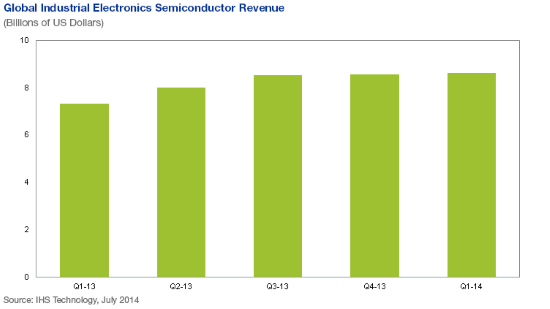 In contrast, the segments that did not do as well were homeland security, military aircraft, and general-purpose test and measurement.

The United States, China, Japan and Germany together accounted for 71 percent of chip-design influence. The United States remains the leader with nearly one-third market share, but a strengthening China will increasingly challenge U.S. dominance and also benefit from a declining Japan.