The annual value for the industrial semiconductor market is forecast to rise to $55.2 billion in 2018, up from $34.8 billion in 2013, due in large part to increased capital spending by firms and continued economic growth, according to a report from IHS Technology.

The projected increase would represent a compound annual growth rate (CAGR) of 9.7 percent.

Robbie Galoso, principal analyst for IHS, said through a statement that chip companies are paying more attention to the industrial sector because of the strong growth. “Chips are being used in applications that did not previously use semiconductors," Galoso said.

"Growth in the industrial segment has also been buoyed by a gradual acceleration in the global economy, which continues to boost industrial equipment demand, especially from the United States and China," Galoso added. 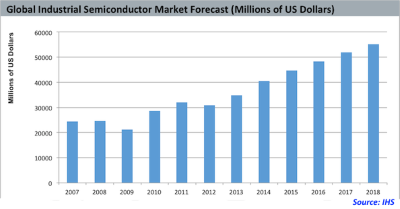 The world economy, which strengthened in 2014, is expected to flourish through 2018, according to IHS. The U.S. economy is expected to set the pace, with growth in gross domestic product (GDP) estimated to be between 2.4 percent and 3.1 percent per year through 2016, IHS said. 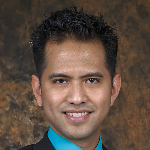