Two 5.9-inch AMOLED displays panels that can be folded repeatedly on a radius of curvature as tight as 2mm have been demonstrated by researchers from Japan's Semiconductor Energy Laboratory Co. Ltd., subsidiary Advanced Film Device Inc. and multiple Nokia research sites. One of the displays could be folded in half, like a book, and the other was designed to include two folds, while continuing to display full color images.

The demo could stimulate the development of smartphones where the entire surface is a display and that could be opened out to form a tablet computer.

The researchers took their prototype AMOLED displays to the SID 2014 display exhibition and presented two papers at the conference there. Both are 5.9-inch panels when unfolded with a pixel resolution of 1,280 by RGB by 720 and 249 pixels per inch. 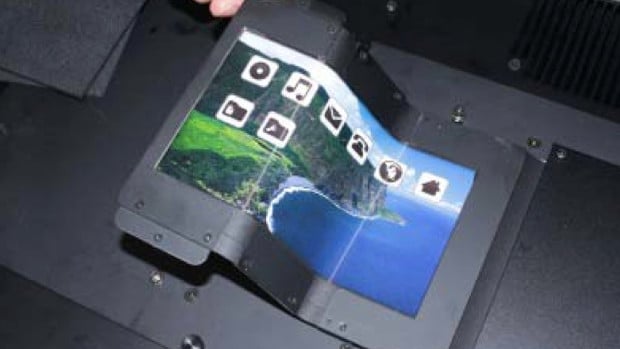 The displays are based on C-Axis Aligned Crystal (CAAC) layer of indium gallium zinc oxide (IGZO). This is a so-called "oxide semiconductor" technology previously developed by SEL and which represents an alternative approach to flexible displays based on organic transistors printed on plastic substrates such as those being researched by Plastic Logic Ltd. (see Flexible Plastic Logic Pursues Wearables Display Market).

OLED performance is susceptible to degradation due to moisture and so maintaining the integrity of encapsulation is vital to any foldable display. The research team reported a water vapor transmission rate (WVTR) through its encapsulation estimated to be less than or equal to 7 x 10^-6 grams per square meter-day and an endurance of greater than 1,000 hours without any signs of degradation. 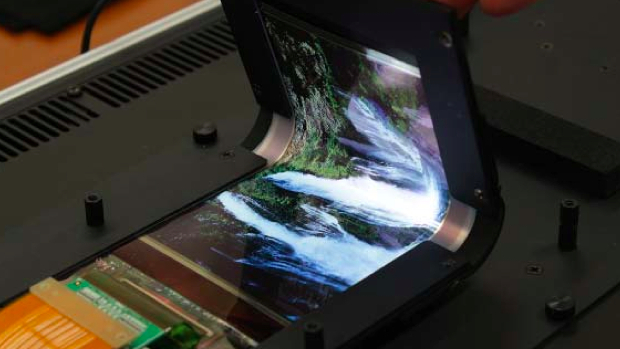 In the second paper a 3.4-inch 540 by RGB x 960 display was reported. It was manufactured using the same materials and approach and this was subjected to 100,000 bends on a 2mm radius with no defects observed.

The research team concluded that the bend radius, endurance and bending cycles demonstrated by the displays will enable reconfigurable portable equipment to be realized.