Where Will Machinery Growth Come From?

Industrial machinery covers a vast array of devices: agricultural equipment, machine tools, packaging machinery, semiconductor equipment and robotics, to list just a handful. Regardless of the machine type or application, the end product is invariably one purchased by the consumer, whether it is a box of cereal, a can of Coke, a TV, or a car. As such, the strength of machinery market is always closely linked to general economic performance, albeit there are other factors influencing the industry – regulations, currency fluctuations, new trends and technology.

The machinery production tracker from IHS follows output across 33 countries as part of three regional volumes examining Europe, The Americas and Asia Pacific. When considered on a regional level, the recent patterns are intriguing. 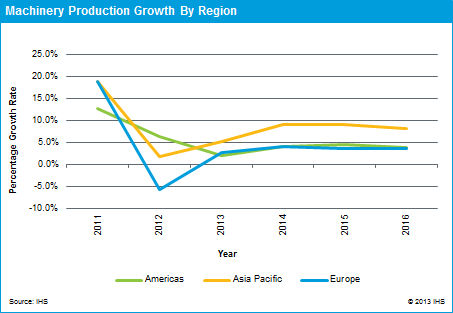 Following two years of significant growth, 2012 saw a turbulent year in all three regions, to varying degrees. The Americas fared well, with machinery production still growing by 6.5 percent during 2012. The region was boosted by significant government investment in the U.S., and furthermore it had the advantage of being a much more secure destination for investment than Europe was during the prolonged sovereign debt crisis and austerity measures.

In Asia Pacific, however, growth slowed to only 1.8 percent. A major reason for this is down to an unusually slow year for China, where production remained almost flat, largely as a result of overcapacity. At the same time, output in Japan was inhibited by a very strong yen—as recently as 2011, the Japanese currency reached a record of 76 yen to the dollar, significantly curbing its machinery exports. More recently, Japan has benefitted from a weakening Yen, with dollar yen now being over 105 yen, a level not seen in over five years.

Europe, meanwhile, struggled as the economic problems persisted. Several nations required bailing out by the ECB and for a while there were genuine fears that Greece may even have to leave the Euro. With exports to outside the region still slow, and demand from within the Eurozone even worse, machinery production actually declined by 5.7 percent in 2012 (although it did look somewhat better when measured in Euros, with output increasing slightly).

During 2013, machinery production in Europe and the Americas headed in contrasting directions. Whilst Europe, where there is significant pent up demand, saw a big improvement, returning to growth of 2.8 percent, output in the Americas slowed to 2.0 percent following a back-to-back years of strong growth.

Looking forward, the outlook for 2014 is expected to see further improvement in machinery production, but there remains fragility. Indications are that orders are tending to head upwards, but gradually, particularly in Europe and the North Americas, where growth continues to be subdued.

Longer term, the outlook appears positive. Along with improving economic conditions, there are other factors helping to drive growth in machinery production. In packaging, for example, there is demand for more flexible machines to produce lighter packaging with improved aesthetic appeal and less wasted material. In food & beverage and pharmaceuticals there is greater demand for track and trace capability. Alongside this there is a continued drive for higher speeds, improved efficiency and lower emissions, all of which should help continue push growth. Improved remote machine diagnostics alongside greater functionality with simplified user interfaces is also driving growth in the machinery market, partly as end-users look to compensate for the problematic engineering shortfall.