Where Will Growth Come From for the PLC Market?

The world market for programmable logic controllers (PLCs) was severely challenged in 2012 as it went through its first downturn since 2009. As a result, most major markets contracted. A weak European and a stalled Asian economy affected other regional markets dependent on PLCs.

As the leading industrial market in Europe, the Middle East and Africa (EMEA), Germany saw its PLC market—the largest in the region—barely grow last year. This was a reflection of the general poor economic conditions across Europe, as Germany accounted for more than one third of the EMEA PLC market. Germany’s industrial machinery production, the largest in EMEA, grew by only 1.1 percent in 2012, much lower than the 11.3 percent growth in 2011. Asia, which used to import many industrial machines from Germany, was in a manufacturing downturn, which impacted Germany’s PLC industry.

It was a similar situation in China, which saw virtually no growth in the PLC market in 2012. In part, this was a consequence of a slowdown in China’s machinery production, which fell to only a 1.0 percent growth rate in 2012 down from 19.9 percent in 2011.China accounts for over 50 percent of the Asia-Pacific PLC market, excluding Japan. China’s economy is in transition, with the Chinese Government unlikely to depend on massive investment in industry as much as before. Enterprises need to adjust their strategies in China to cope with these changes.

However, there was some positive news in 2012. The American PLC market grew by nearly 5.0 percent, mostly because of domestic growth, which accounted for around 70 percent of the regional total. Strong domestic demand saved the US market from the global downturn. Under its recovering economy, with some manufacturing returning to the United States, US machinery production grew 7.2 percent last year. Unlike most other countries, industrial end users in the US accounted for nearly as much of the 2012 PLC market as machine builders. 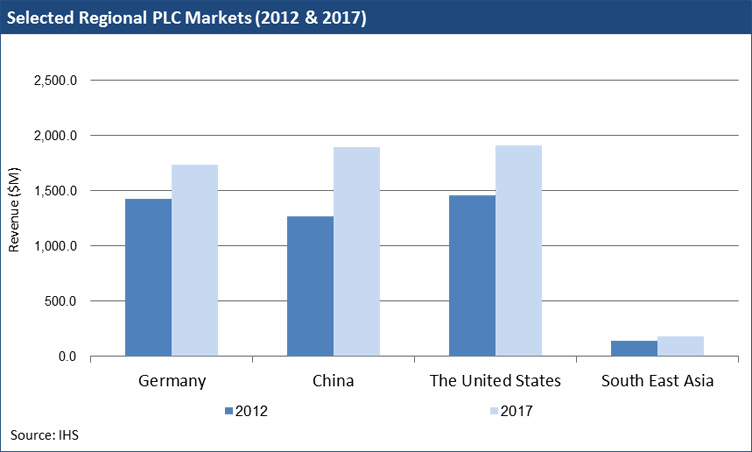 The weakness in the larger markets has forced PLC vendors to seek opportunities in new markets. In a region with a mixture of comparatively mature and emerging economies, the PLC market in South East Asia has thrown up both challenges and opportunities. The South East Asia market, relying heavily on exports, was also affected in 2012; but the impact was limited. The more developed countries like Singapore and Malaysia were the most affected, as they are heavily dependent on exports. However, the PLC markets of emerging countries, such as Indonesia and Thailand, are showing strong growth.

Years of development have helped these countries achieve a good level of factory automation with an adequate infrastructure and labor force. Thailand, which has a significant automotive industry, has a good foundation for machinery production; in turn, its PLC market is robust and predicted to grow considerably. In 2012, recovery from the devastating flood of 2011 gave even more momentum to Thailand’s PLC market growth.

Though 2012 was a hard year for most regional markets, the world PLC market is projected to grow over the next few years as the global economy recovers.