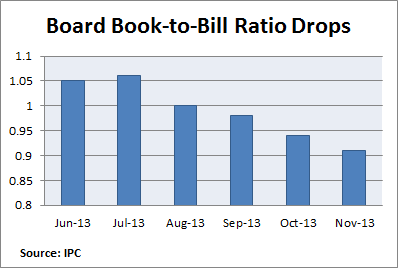 The board book-to-bill ratio was 0.91, down from 0.94 in October. A ratio of 0.91 means that board manufacturers received only $91 of new orders for every $100 of boards that they shipped in November.

"While sales continued to strengthen in the North American PCB industry compared to last year, orders declined," said Sharon Starr, IPC's director of market research. "This disparity between sales and order growth pushed the book-to-bill ratio to its lowest point since March 2009. She added that he results indicate “a slow and possibly bumpy recovery going into 2014."