The decision to launch both the iPad Air and the second-generation iPad mini in the fourth quarter of this year could backfire on Apple Inc., particularly since the company won't be able to keep pace with demand for new mini initially due to supply constraints on its 7.9-inch Retina Display, according to IHS.

"With supply of the new Retina mini estimated to come in at one-third or less of Apple's mini unit shipments in the fourth quarter of 2012, it's curious that Apple elected to include the product at the same time as the iPad Air," said Rhoda Alexander, director of tablet research at IHS. Alexander noted that Apple could have split the product launches—as the company did in 2012—and introduced the mini in the first quarter of 2014.

Apple's decision to launch both the iPad Air and second-generation iPad mini in the current quarter has created some serious growth challenges for the company in 2013, IHS said.

Apple's tablet unit shipments declined year-over-year in the second quarter, the first time that had occurred in any quarter. IHS cited the lack of a March iPad launch for the decline. 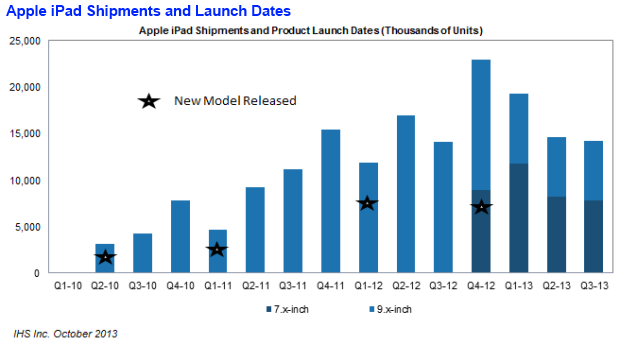 That timing shift also robbed Apple of the momentum that it normally had in what is historically a slow consumer quarter and opened the door to competitors such as Samsung, which launched its 8-inch Galaxy Note during the second quarter, IHS said.

According to IHS, shipments of the new iPad mini will amount to less than 4 million in the fourth quarter. Shipments could potentially be lower than 3 million units, which would amount to about one third of the 8.9 million units Apple sold of the original iPad mini in the fourth quarter of 2012, the first quarter it was available, IHS said. Demand for the original iPad mini was far greater in that quarter, leaving Apple with a huge backlog of orders for the mini at the start of 2013, IHS said.

Demand for the new iPad mini is expected to be at least 9 million units or more in the fourth quarter, IHS said, which would leave supply and demand severely out of balance.

Alexander said Apple is being deliberately vague about the exact date of the new iPad mini's availability, saying only that it would ship later in November. "The company has good reason to be coy about the exact release date, given that supply of the new mini is going to be ridiculously tight in the fourth quarter," Alexander said, citing supply constraints on the new Retina panel.

Production is still ramping up on the 7.9-inch Retina panel with low yield rates limiting production, according to IHS display research. With most of the production occurring late in the quarter and the challenges inherent in the new system design, iPad manufacturing is expected to lag well behind panel production in the fourth quarter, IHS said.

The Retina panel supply situation is expected to improve substantially in the first quarter of 2014, IHS said. But with Chinese New Year falling at the end of January, supply difficulties on the new mini could linger into February or March of 2014, according to the firm.

The iPad Air incorporates the design elegance of the original mini, delivering a device that is 0.4 pounds lighter and 20 percent thinner than its predecessor. Apple also improved connectivity, incorporating MIMO inside to boost Wi-Fi performance, the new A7 processor chip, and expanded LTE bands to support more carriers around the globe.

In addition to potentially providing an extra boost to iPad shipments in 2014, the two-pronged approach could have also allowed Apple to own the product news cycle for much of the year, which provides copious free advertising for the Apple brand, IHS said.

By itself, this high resolution is not enough to justify a selling price for the new mini that is $170 more the than that of the new Google Nexus 7 tablet and the Kindle Fire HDX 7 from Amazon, each priced at $229 for similar pixel density, according to IHS. But the combination of the Retina Display panel with the new iPad mini's overall product design—including 64-bit architecture, durability, ease of operating system upgrades and richness of the Apple ecosystem—makes it a reasonable price point for the product, according to IHS. But the firm added that the price point is likely to be a sticking point for value-centric consumers weighing the lure of Apple against the ever-expanding array of Android alternatives.

Apple has dropped the price point of the original mini to $299 to reach some of those users, but that price point still sits well above the market average for 7-inch products with similar performance, IHS said.