A collaborative research project in Europe called "Graphene Flagship" was formally launched with a budget of €1 billion (about $1.3 billion). Its 10-year mission is to take graphene, the single-atom layer sheet-form of carbon, and related layered materials out from academic laboratories and use it to transform multiple industries, including electronics and semiconductors, and thereby create economic growth and jobs in Europe.

Graphene was identified by the European Commission, the administrative arm of the 27-nation European Union, as a future emerging technology in January. The EC identified graphene as an area it wanted to back with extensive support.

The Graphene Flagship consortium already includes 75 academic and industrial organizations from across 17 European countries. The research will focus on the application of graphene to communications, energy technology and sensors. Because of the high strength and electron mobility of the two-dimensional graphene, it is widely expected to have a significant impact on both semiconductors and structural materials. 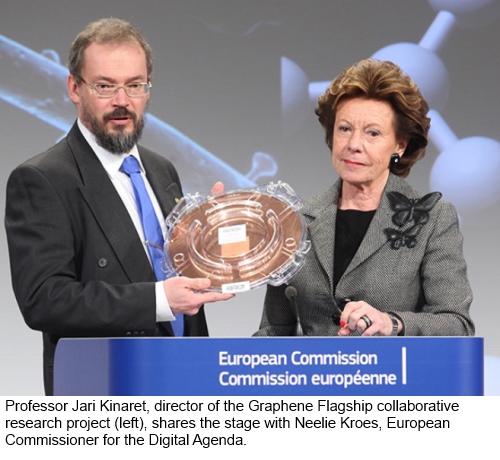 Consortium members include aircraft maker Airbus, communications company Nokia, and chip company STMicroelectronics. The group includes a great number of leading European universities including the University of Manchester, the academic base of Andre Geim and Konstantin Novoselov, who were awarded the Nobel Prize in Physics in 2010 for their experiments in graphene.

The Graphene-Flagship project is coordinated by Chalmers University of Technology (Gothenburg, Sweden) and its director is Professor Jari Kinaret, leader of the Condensed Matter Theory (CMT) group at the Department of Applied Physics there.