Massachusetts Institute of Technology researchers have proposed combining ferroelectric materials with graphene that could lead to denser computer and memory chips, and consume less power than today’s chips.

The system would provide a new way to construct interconnected devices such as fiber-optic cables and photonic chips, with electronic wires and devices. Currently, such interconnection points often form a bottleneck that slows the transfer of data and requires extra components.

The findings were reported in May by the researchers led by associate professor of mechanical engineering Nicholas Fang in Applied Physics Letters. In the paper the authors show that the two-dimensional plasmons in graphene can strongly couple with the phonon-polaritons in ferroelectrics, leading to characteristic modal wavelength of the order of 100–200 nm at low temperature and low-THz frequencies albeit with an appreciable dissipation. By patterning the ferroelectrics into different domains, one can produce compact on-chip plasmonic waveguides, which exhibit negligible crosstalk even at 20-nm separation distance. Harnessing the memory effect of ferroelectrics, low-power operation can be achieved on these plasmonic waveguides, according to the researchers. 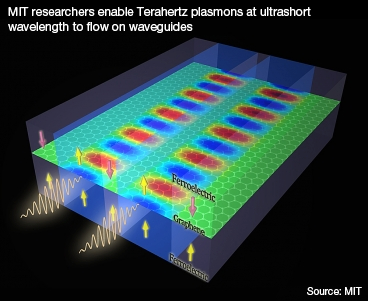 The team’s new system allows waves to be concentrated at much smaller length scales, which could lead to a tenfold gain in the density of components that could be placed in a given area of a chip, Fang said.

The initial proof-of-concept device used a small piece of graphene sandwiched between two layers of the ferroelectric material to make simple, switchable plasmonic waveguides. This work used lithium niobate, but many other such materials could be used, the researchers say.

Light can be confined in these waveguides down to one part in a few hundreds of the free-space wavelength, which represents an order-of-magnitude improvement over any comparable waveguide system, according to the researchers.

The research work may also provide a means to read and write into ferroelectric memory devices at very high speed.

Dimitri Basov, a professor of physics at the University of California at San Diego expressed confidence in the methodology but cautioned that plasmonic losses need to be properly understood. The MIT team “proposed a very interesting plasmonic structure, suitable for operation in the technologically significant [terahertz] range. … I am confident that many research groups will try to implement these devices.”

The MIT work was supported by the National Science Foundation, and the Air Force Office of Scientific Research.