Many of these things are coming… soon. After more than a decade of development work, flexible displays should start moving out of the research labs and prototype production and into a modest number of devices in late 2013 or early 2014.

Despite technical challenges still associated with making thin, unbreakable and conformable displays, market trends point to a promising future for this young industry.

IHS estimates that shipments of flexible displays will grow nearly 250 fold between 2013 and 2020, fueled by demand from a broad array of applications. Flexible display shipments are expected to reach 792 million units globally in 2020, up from 3.2 million in 2013, according to a recent IHS report entitled “Flexible Display Technology and Market Forecast.” The report projects that market revenue for flexible displays will grow from just over $20 million to $41.3 billion during the same seven-year period. 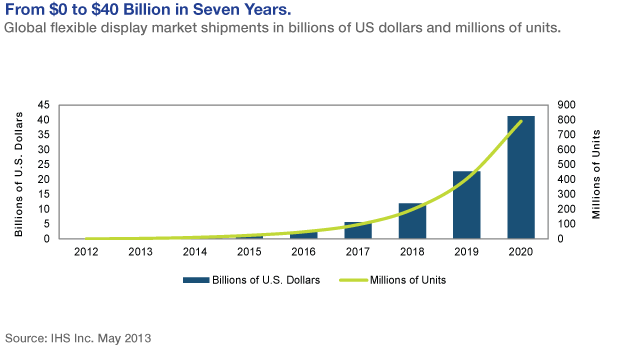 The growth drivers for flexible displays are similar to those that have propelled other technology developments.

Firstly, companies must continually differentiate their products from those of competitors, particularly in fast moving markets like smartphones and tablets. Designing and using flexible displays for next-generation products could give them that edge, especially coming off the innovative touchscreen advancements ushered in by the smartphone revolution, said Vinita Jakhanwal, director for mobile and emerging displays and technology at IHS.

“In the mobile device market, there is constant pressure on companies to do something different,” Jakhanwal said. “Now that the basic functionality of the devices is similar, handset manufacturers are looking for ways to differentiate themselves.”

“Most of the mobile devices are becoming slightly larger,” Jakhanwal said. “The displays are getting into the five or six-inch diagonal size. Consumers are also using and consuming a considerable amount of content on their mobile devices.”

But while consumers might appreciate a larger screen, they don’t want their mobile devices to get bulkier or heavier, Jakhanwal said. Flexible displays could enable larger, unbreakable screens without increased weight or power consumption, she added.

But as with any new technology, underneath the encouraging projections lie obstacles that have to be overcome before flexible displays will gain first-adopter traction and eventually widespread commercial approval.

From a broad industry perspective, patience will be required in sorting through what flexible display technology is used in which applications.

Currently, several different technologies are being explored and advanced. Some of the more promising include:

In addition to technical differences, it will take a few product generations before full flexibility is attained, said Jakhanwal. IHS classifies flexible displays into four generations of technology.

Now entering the market are first-generation durable display panels, which will likely be the dominant product type until about 2017, she said. These panels use a flexible substrate to attain superior thinness and unbreakable ruggedness, but they are flat displays that cannot be bent or rolled, according to Jakhanwal.

Next will come bendable and conformable flexible displays which can be molded to curved surfaces. The third generation will allow end users to manipulate rollable displays. Further out, the price of fourth-generation flexible displays—disposable displays—will drop enough that they can serve as a replacement for paper, Jakhanwal said.

There are other technical and process issues as well, said Dipak Chowdhury, division vice president and Willow Glass program director at Corning Glass Technologies, adding that his view is more based on anecdotal experience rather than data.

There are also challenges related to the reliability of the thin film transistor layer, the high temperature tolerance of the substrates and the barrier properties and durability of the barrier, according to Chowdhury. Other issues involve getting plastic backplanes that can sustain the process temperature ranges and making sure the OLED displays are hermetically sealed, he added.

While large companies are working to overcome these challenges, they are difficult problems to solve, Chowdhury said. “Some companies have solved them, but they cost an enormous amount of money,” Chowdhury said. “Others are still working on improvements.”

Corning’s solution, for instance, is Will Glass, a glass product that bypasses some of the plastic substrates’ limitations and works well with OLEDs, he said. The thin, strong and flexible glass, has a is produced on a continuous “roll-to-roll” process (a demonstration can be seen here).

And, of course, there are cost considerations to weigh. Besides understanding what the market value proposition is beyond having a cool new gadget to show off, the inherent process of migrating to flexible displays could give companies sticker shock.

“The major selling points will be that, yes, it’s flexible, but also that the displays are lightweight and robust,” said Barry Young, managing director at the OLED Association. “But, it’s no doubt going to be much more expensive than having a four or five-inch display that’s made out of glass.”

OLED display production, which includes thin-film encapsulation to protect the OLEDs from the environment, costs at least twice as much as producing a glass display, Young said. Production yields are also likely to be lower than yields of glass, which is a much more mature technology, he added.

Although challenges loom, there is no shortage of ideas about how flexible displays could be used in commercial applications.

“There is a big difference between what you can do in a lab and what you can do to make a working, nice-looking prototype and a final finished product,” said Ferrari from the Cambridge Graphene Centre. “There are all sorts of crazy suggestions out there, but I wouldn’t want to dismiss any of them. You never know, maybe one of the ideas will be implemented and lead us in new directions.”

The OLED Association’s Young added that the nascent market will likely get off to a modest start before engineering imagination spins off into innovative and creative paths.

“Longer term, you could envision all sorts of products,” Young said. “For example you could think of a display that is two or three millimeters thick with one side having some of glue that could be used to paste the display on a wall or refrigerator. And then you can get into the conformable displays, panels that could be used on a car’s dashboard.”

The first wave of commercially available flexible screens are likely to be used mostly in smartphones, tablets and TVs, according to several executives. The largest application for flexible displays during the next several years will be personal electronic devices, according to IHS.

Samsung and LG, as already mentioned, are leading in these areas.

While a Samsung spokesperson declined to answer questions or provide product details, the company announced its Youm flexible displays at CES earlier this year, with mobile devices winning the on-stage spotlight. Panel production was widely expected before the end of the calendar year, but news surfaced on etnews in April that Samsung hit a technical snag with its flexible display encapsulation technology, delaying the production schedule.

Both companies also rolled out super thin, curved 55-inch OLED televisions, which began selling in the US this summer for upwards of $13,000 to $15,000.

Going forward, the trend could move towards reaping additional benefits from the unbreakable attributes of flexible displays, and then later, leverage their conformable nature, said Plastic Logic’s Banach.

Banach added that Plastic Logic’s technology also has a number of non-display applications. The company recently collaborated with ISORG, a printed electronics startup based in France, in creating the first plastic, flexible image sensor, he said.