Do customers want robots in restaurants? 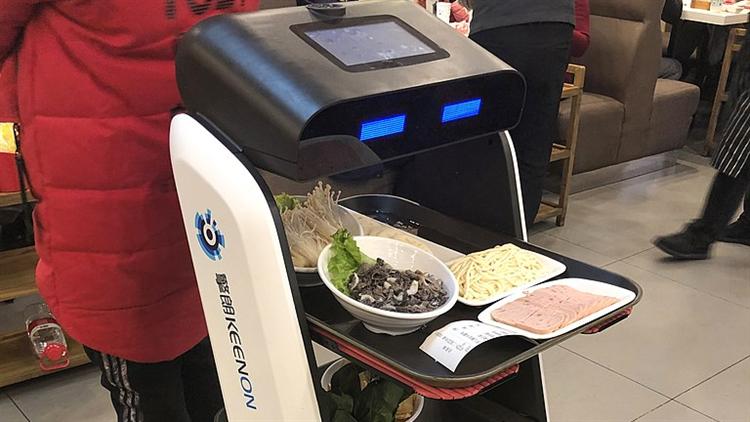 As technology continues to become more and more advanced, it's only natural that some of the tasks and roles that have been traditionally carried out by human beings are going to be taken over by machines. This is especially true in industries where there is a lot of repetitive work to be done, or where precision and speed are essential.

One of the industries that is most likely to be affected by the increasing use of robots and automation is manufacturing. In many factories, robots are already being used to carry out tedious, stressful or dangerous tasks typically performed by a human operator or QC monitor. According to the BBC, it is estimated that by 2025, around half of work tasks could be carried out by robots, and by 2030, 20 million factory jobs will be replaced with robots.

The productivity benefits are obvious. Robots don't tire or need breaks. The don't need benefits or sick days, and they do repetitive tasks with precision. They, at most, need periodic maintenance or reprogramming, tasks which don't even need a software engineer to do anymore. Robots are becoming democratized - easier to buy, install, run and reuse for even the most basic of assembly and manufacturing tasks.

But what about jobs in the service industry, particularly restaurants? Indeed, many of the food preparation and assembly tasks in a kitchen have an industrial equivalent. However, food is a cultural experience, and robot culture is non-existent (yet).

So, are humans ready for the food to be ordered, cooked and served exclusively by automatons? Let's take a look at some recent examples.

Robots and automation technology are gradually making their way into the restaurant industry. Many restaurants have already implemented at least some form of automation, although to date this has largely been relegated to ordering and point-of-sale systems. Many McDonald's restaurants worldwide feature a large, interactive kiosk for this purpose.

There are many benefits to using robots and automation in restaurants. For one, they can help to improve efficiency and accuracy in food preparation and service. They can also help to reduce labor costs by requiring less employees overall. This should in turn free up employees to do higher value work and potentially earn more by having less coworkers to compete for salary and promotions. (Whether that actually happens is a different article). Additionally, robots and automation can help to create a more consistent experience for customers, as well as decrease wait times.

Local culture is an important factor. In some countries, take Japan for instance, robots are well-accepted, and many patrons have come to accept and respect automated systems for mundane tasks. This BBC article ascribes Japan's willingness to accept robots to myriad factors touching on religion, philosophy, the technological and the historical. Meanwhile, Western countries are more likely to see robots as subservient tools, dedicated only to human satisfaction.

Another important consideration is the level of interaction that customers will have with robots. Providing your order to robot is straight-forward, although it can quickly become cumbersome for finicky diners with demanding palates or food preferences. Would most patrons accept the wine recommendation from a robotic sommelier in a fancy French restaurant? Probably not. If the robot is unable to divine satisfaction through taste, it is harder to trust them for something so subjective. Similarly, it gets harder for a robot to "season to taste" many dishes or adjust cooking algorithms for when there are five pot pies in the oven versus just one.

For these reasons, to date, robots in the restaurants are largely out of view and restricted to simple tasks.

As the fast-food industry becomes increasingly automated, White Castle is the latest chain to jump on the bandwagon with the introduction of their new robotic kitchen assistant, Flippy 2. Flippy 2 builds on a previous rollout of Flippy, with 100 White Castles expect to adopt the system this year or next.

Flippy 2 is a robotic arm mounted on a rail that is powered by artificial intelligence software. The system can cook about one order per minute, from frozen to staging, where a human checks and packages the meal. While this may sound like a recipe for job losses, White Castle insists that Flippy is merely meant to complement their workforce, not replace it.

This is a great example of adding robot to a restaurant setting and keeping it successful by knowing where its limitations are and pairing it with human oversight.

Nala Robotics can make anything

Whereas White Castle is gradually adopting robots, startup Nala Robotics believes that it can completely disrupt the traditional restaurant kitchen. Their vision is for a restaurant that is open 24/7/365, can prepare any dish, and deliver it to the customer with high satisfaction. This is made possible with the pairs of robotic arms, and AI and machine learning that can digest new recipes and turn them into actionable steps for the robots.

Nala Robotics has launched One Mean Chicken in Naperville, Illinois, to test this concept. Eventually the company plans to offer more than just fried chicken and wings at the store, with expansions to Indian and Thai cuisine. Customers will be able to order ahead and pick up their meals, customize their ingredients and potentially be able to subscribe to the service, so they know their fried chicken fix will be consistent and available.

One Mean Chicken is absolutely a testing ground for the idea of a human-less kitchen. Even if the robots work perfectly, it is unclear if humans are going to accept that a tasteless entity is cooking their food to a formula, not to a scent, sight or touch.

Engineering360 would love to hear your thoughts on automation in the comments below – do you see it as an opportunity or a threat? Is there somewhere you think robots could be particularly useful in the food service industry?

Instead, it relies on the subjectivity of humans and their ability to get over preconceived notions that robots might not be able to complete the 'robotic' tasks that humans have both excelled at and grown weary of. There is a lack of trust between humans and robots, although that varies by culture. It is many of the same challenges that autonomous driving is encountering.

Ultimately, for robotic restaurants to become truly pervasive, it is perhaps better that the eaters don't know who, or what, made their food at all.