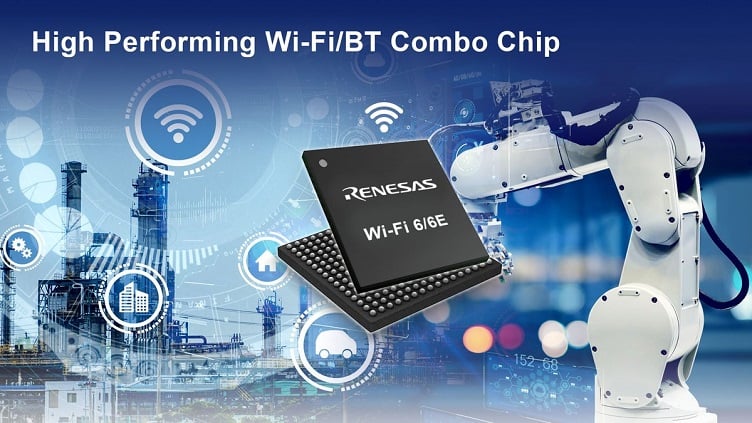 Japanese chipmaker Renesas Electronics Corp. has unveiled a Wi-Fi roadmap designed to complement its line of industrial and internet of things (IoT) products.

Renesas made the announcement at Electronica 2022, taking place this week in Munich, Germany. The company said the new Wi-Fi devices are based on technology gained as a result of its Celeno acquisition in 2021.

As part of the roadmap, Renesas said it is now in production of its Wi-Fi 6E access point solutions, called the CL8000 family. Additionally, the company has started sampling the integrated 2x2 Wi-Fi/Bluetooth Low Energy (BLE) combo chip that supports the Wi-Fi 6E tri-band switchable radio, 160 MHz channel bandwidth and up to 2.4 Gbps data link speed.

Renesas said it is developing a Wi-Fi 6E chipset with Wi-Fi Doppler Imaging technology that can depict the range and doppler signature of people and objects using standard Wi-Fi signals.

The company said this will eliminate the need for multiple cameras or sensors in home environments and commercial buildings. Examples include people detection in a room to redirect or optimize air flow or to identify intrusion of secured facilities through motion sensing cameras.

The chip is schedule for production in the next 18 months.

Another chip under development is a Wi-Fi 7 device that will double the bandwidth of current wireless broadband, double the maximum speed and increase speeds in the 2.4 GHZ and 5 GHz band by as much as 30%. Wi-Fi 7 is expected to launch in 2024 and Renesas’ semiconductors will be used in home networking, IoT, industrial and consumer multimedia devices.

Currently, Renesas has combined Wi-Fi 6 and 6E chipsets for Wi-Fi 6 routers for home gateways to 5G networks, but in the future these combo chips will expand to video IP phones, smart home security terminals and its Quick-Connect IoT platforms for prototyping.