Electronica 2022: What tech to expect 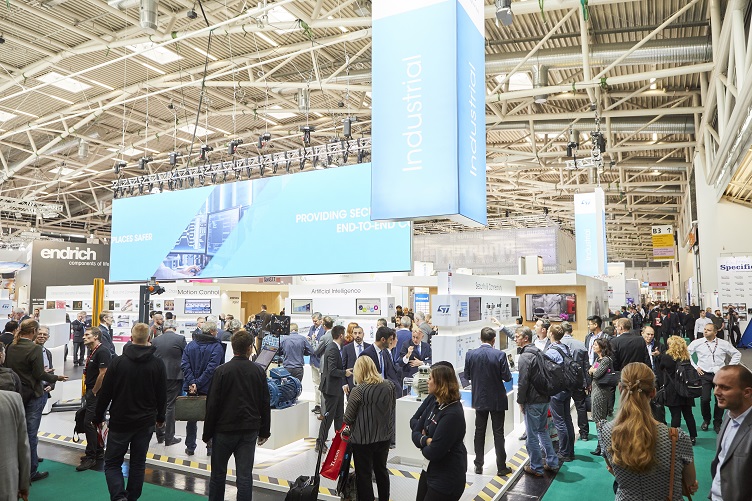 At Electronica 2018, one of the last prior to COVID-19, visitors comb the trade show floor looking at new technology in the realm of semiconductors, automotive and industrial technology. Source: Messe Munchen

One of the largest trade shows in the world, Electronica, is making its return next week in Munich, Germany.

The show will feature new sensors, industrial and automotive components, industrial ICs and much more. Here’s a partial list of what technology to expect during the show taking place Nov. 15 through Nov. 18.

Many new sensor announcements will be unveiled at Electronica 2022.

Pearl Semiconductor will introduce what it claims is the first ever true single-die reference clock technology. Called SingleDie, the technology enables the embedding of a microelectromechanical systems (MEMS) surface acoustic wave (SAW) resonator into a larger CMOS IC on the same die.

This results in a low-noise, on-chip reference clock platform for automotive and industrial applications in harsh environments.

Excelitas Technologies Corp. plans to display its sensor and detector offerings for use in electronics applications including a series of photodiodes for radon gas detection and alpha particle detection.

Finally, ams Osram will bring its latest sensing and lighting solutions to the trade show, including sensors for industrial, automotive, wearable, horticulture and healthcare markets.

Electronica will see a wide range of components for the industrial and internet of things (IoT) markets.

This includes a full range of 650 V e-mode gallium-nitride-on-silicon (GaN-on-Si) power solutions from Innoscience Technology. These devices include the new 190 mΩ, 350 mΩ and 600 mΩ R devices.

Innoscience said all the electronic components are JEDEC standards for chips and package qualified and have passed dynamic high temperature operating life test (DHTOL) reliability testing according to JEP180.

Given the automotive industry is undergoing its largest transition in its history — the move to electrification— Electronica 2022 will have several semiconductor and other announcements. Some of these include:

Digi-Key Electronics will be at Electronica 2022 and is bringing several of its executives to focus on emerging trends. The company is not ready to announce what its plans are yet, but it will have a significant presence at the trade show next week.

Mouser Electronics will also have a sizable presence during Electronica 2022 and will feature games and coffee for visitors and will have executives on site to discuss the latest technologies including evaluation kits, reference design boards and single board computers. Mouser will also be giving away many of its kits and boards to guests.

Meanwhile, Fusion Worldwide, an independent open market distributor, will announce new investments and enhancements to its testing house in Singapore.

Memory is one of the largest electronic components due to the technology needing to be used in virtually everything.

Not surprisingly, memory chipmakers will be in force at the trade show including U.S.-based memory manufacturer Micron Technology. The company will be showcasing how its DRAM and flash memory will play a role in future intelligent edge solutions that will power IoT, smart manufacturing, intelligent vehicles and other embedded systems.

Additionally, Nanya will present how it is working with Formosa Plastic Group, Taiwan’s largest conglomerate, on a range of businesses for green biotechnology, petrochemical processing and electronic component production.

Nanya won’t be the only one that makes sustainability one of the key focuses at Electronica 2022. In fact, it will likely be some of the main focuses for some of the companies attending as green technologies are growing in demand.

This doesn’t even begin to include the move to electrification that is happening in the automotive market where every OEM is switching to electrified models over the next 15 years. This is due to mandates of government and global policies as well as rising consumer demand for electric vehicles.

This will likely be one of the largest new areas of technology at the show this year.