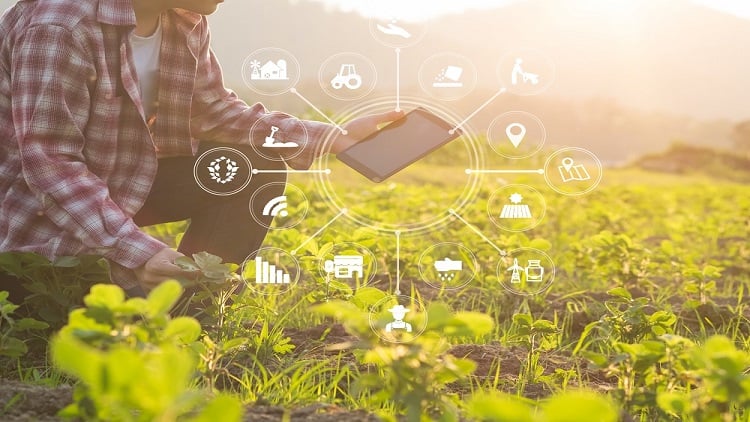 Soil moisture plays a crucial part in the plant development process in agriculture. It is possible to determine a field's moisture by examining it directly. Utilizing a thermometer and hygrometer, the temperature and humidity of an agricultural field can also be gauged. However, this technique can be time-consuming and labor-intensive, and farmers require a simpler approach to determine the status of fields. A more efficient means of determining farm field conditions is to install sensors and track its state remotely. A wireless sensor network (WSN) offers technology to collect data from field sensors and transfer it wirelessly. This article discusses the benefits of using WSNs and several examples of such sensors that are being used for different purposes in the agriculture industry.

Several wireless sensor nodes make up a WSN, which collects, measures and sends data from the environment around them. Such monitoring can raise the level of agricultural quality and output. A WSN has limited or no infrastructure and a large number of sensor nodes that work together to monitor a given region.

It is possible to categorize WSNs according to their framework (structure or unstructured). Structured WSNs are ones that are deployed in a particular region and may be quickly configured if a senor node experiences difficulty. On the other hand, sensor nodes in an unstructured WSN are deployed in large numbers without a clear architectural framework. These kinds of WSNs are generally located in remote locations that are difficult to access and collect data from. It is difficult to maintain sensor nodes in an unstructured WSN if they quit operating or have a problem with node failure.

WSNs are being increasingly used for precision agriculture, a crop management approach that helps farmers deal with issues such as reducing natural resource inputs, improving crop irrigation and fertilization, and monitoring real-time data in the field. Increasing agricultural yields is the motivation behind the use of sensors in precision agriculture. Different aspects of agricultural land, such as dampness, soil moisture, climate, pH, incursion detection and water level may be measured with wireless sensors, which makes it easier to improve productivity. Additionally, sensors may gather data on a wide range of characteristics and use that data to improve agricultural practices. The following list summarizes some of the significant roles that sensors play in agriculture:

Soil texture may be detected using acoustic sensors, which measure how much noise is generated by the contact of a device with soil particles. Seeds are classified by their sound absorption spectra using this sensor. Moisture content, soil air permeability and soil structure can all be measured using airflow sensors. Different types of soils can also be distinguished by the use of airflow sensors. Electrochemical sensors monitor soil salinity, pH, and macro and micronutrients, while electromagnetic sensors can be used to modify real-time variable rate applications, detect electrical responses, and map transient electromagnetic responses with electrical conductivity. Other uses include the detection of organic materials and residual nitrates in the soil.

Strain gauges or load cells detect the stress exerted on soil using mechanical sensors that pierce or cut through it. Plant transpiration may be monitored in real-time using a sensor based on field-programmable gate arrays (FPGAs). Clay, organic matter and moisture content may all be predicted using optical sensors. Weeds in vast rows of crops can be detected using optoelectronic sensors. Carbon metabolism in peatlands may be measured using eddy covariance sensors. To monitor the ripening of grapes, a fluorescence-based optical sensor is commonly utilized. In agricultural catchments, sensors based on soft water levels are employed to describe hydrological behavior. Such sensors are really beneficial.

[Discover more about wireless network components and suppliers on GlobalSpec.com]

WSNs are now utilized extensively in agriculture management to enhance the quality and profitability of farming. The farmers require less complicated methods for determining the state of the farm since they frequently have a huge agricultural area. Placing a wireless sensor in a farm field and remotely monitoring its state is now a widely adopted method to detect the status of fields.