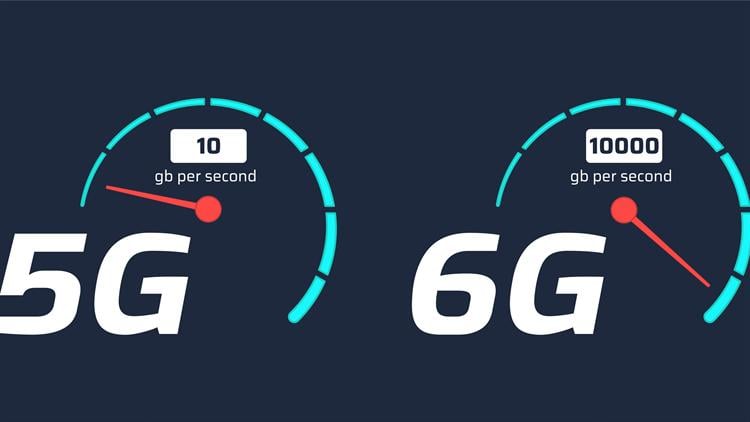 6G isn’t available in the wild yet but the latest specification – Wi-Fi CERTIFIED 6 Release 2 – was published in January 2022. Unlikely to completely or immediately replace 5G for the average user, 6G will build on 5G infrastructure currently in place. The cornerstone of 6G technology is that it will make use of higher frequency bands on the electromagnetic spectrum than 5G, enabling faster data transmission rates, reducing network congestion and lowering latency.

6G and the use of extended spectrums to terahertz (THz) frequencies will more efficiently support novel technologies and applications, from wireless brain-computer (BCI) devices to the internet of space things (IoST).

[Get more insights like this from our Wireless Technology newsletter.]

What is a spectrum in wireless networking?

A spectrum in wireless networks refers to the range of radio frequencies (RFs) used by Wi-Fi signals. Spectrums are grouped into bands (frequency bands) that define the upper and lower frequencies within each spectrum. Within each band, a certain capacity for Wi-Fi use is allocated.

KHz, MHz and GHz are measurements for frequency (cycle units per second speed). The frequency bands available in wireless communication typically range between 20 KHz and 300 GHz, usually categorized as low-, medium-, and high-band.

Low, medium, and high bands have different characteristics. A recent Accenture study identified the following average ranges for these bands:

The often-used term sub-6GHz usually refers to medium- and low-frequency bands under 6 GHz.

The allocation of frequencies is managed by the U.S. Federal Communications Commission (FCC). A complete table of frequency allocations can be viewed here and a chart summarizing these allocations here.

The standards for network generations are set by various governing bodies, like 3rd Generation Partnership Project (3GPP) and its partners.

While succeeding wireless generations are often called upgrades or new versions, they are new iterations of wireless technology with different use cases. There may be multiple versions released for each generation. For example, the latest version of the 5G standard is 17.

The original 6G standard covered 2.4 GHz and 5GHz bands. The 6E standard (where “E” stands for extended) extended 6G capacity to the 6 GHz band, allowing up to 1,200 MHz of additional spectrum. Wi-Fi CERTIFIED 6 Release 2, for the sake of simplicity, covers all three bands.

5G was developed to support the growing internet of things (IoT). It was designed to support intelligent applications like smart agriculture and smart cities, telemedicine, virtual reality, enhanced mobile broadband (eMBB), and sensory-based applications like immersive gaming. However, the spectrums it uses are becoming congested and unable to support some emerging technologies efficiently.

6G was designed to speed up IoT systems and will be used extensively in the business and industrial sectors, to extend the capabilities of Edge computing devices, in the military, for holographic communication, for teleoperated driving, for connected robotics and autonomous systems (CRAS) and wireless brain-computer (BCI) devices, and to enhance digital twinning. It is envisaged that 6G will play a pivotal role in the IoST, like unmanned aerial vehicles (UAVs) and CubeSats (miniaturized satellites). It will be used in the personal sphere for applications like autonomous systems, tactile and sensing devices, and advanced extended reality (XR) applications. The vision for 6G is the support of the internet of everything (IoE). 6G supports mobile broadband reliable low latency communication (MBR LLC) to reduce latency and improve energy efficiency in mobile applications.

A band comprises a range of frequencies, sometimes referred to in terms of wavelength.

Bandwidth describes the size of the band, i.e. the highest frequency available minus the lowest frequency. Because 6G will use higher frequency bands than 5G it will be much faster, offering higher throughput. Throughput in wireless networks is a measurement of the actual data transmitted between network devices, whereas bandwidth refers to the theoretical capacity of the network to transmit data. This theoretical capacity is a lot higher than what users can expect to experience in reality. Signal interference, physical obstacles and the distance between a device and a wireless access point (AP) all have a negative impact on actual throughput.

Data rate refers to the fastest speed data may be transmitted. These figures refer to potential capacity in terms of the standards and are rarely achieved consistently in the real world. Kbps, Mbps, and Gbps are measures of bandwidth speed. Gigabytes per second is usually written as GBps, whereas with Gigabits per second, the “b” is lowercase. There are 8 bits to a byte so a download speed of 20 Gbps (20 Gb/s) is 2.5 GBps(2.5 GB/s).

Spectral efficiency measures the amount of data that can be transmitted to a defined number of users or services within a specific bandwidth in a defined geographic area. It is measured in (bit/s)/Hz.

Refers to the time taken between a request and a response.

Full-duplex means two-way traffic is enabled so that data can be sent and received simultaneously on the same frequency, potentially allowing a 50 percent saving on spectrum requirements.

The IoT has been around a while but 5G has not been very efficient due to the poor allocation and subsequent overcrowding of certain spectrums. 6G aims to extend the range, capacity, speed and energy efficiency of 5G. It is predicted that 6G may see the end, to a large extent, of the smartphone era. Instead, there will be a shift to the use of wearable tech and, according to Bill Gates, electronic tattoos. However, some experts argue that not even 6G will be able to handle wearable Wi-Fi. Is it possible that 7G will supersede the use of 6G?