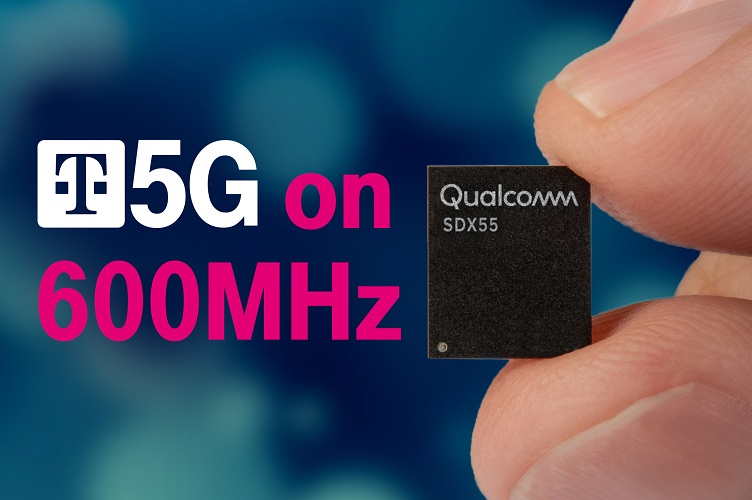 The low band will cover a greater range than mmWave but is not as fast. Source: T-Mobile

T-Mobile, Ericsson and Qualcomm have successfully tested what they claim is the world’s first low-band 5G data session on a commercial 5G modem.

The low band 5G spectrum, known as sub-1 GHz, is used primarily today by U.S. carriers for both 3G and 4G LTE. The low-band provides wide coverage area with good building penetration. Using the low band is seen as a way to expand the coverage area of 5G, which right now is limited in only a handful of cities.

T-Mobile said the low-band spectrum has advantages as the foundation of 5G network. The millimeter wave (mmWave) 5G band allows for faster data rates, but has trouble going through buildings, trees and other objects that block transmissions. The low-band spectrum doesn’t have that problem, but can only ramp up to certain speeds. Using this spectrum will also allow T-Mobile to leverage existing 4G LTE assets and infrastructure, otherwise known as non-stand-alone 5G. This is generally seen as the first step toward enabling 5G with standalone technology coming online in future years, although some telecoms are already going this route from the get-go.

The data session was conducted at T-Mobile’s lab in Bellevue, Washington, on 600 MHz, the same spectrum T-Mobile is using to roll out 5G in the U.S. The companies used a second-generation Qualcomm Snapdragon X55 5G modem, RF transceiver and RF front-end solution as well as commercial 5G radios from Ericsson's radio system portfolio.

The companies said that the Snapdragon X55 5G modem will support other bands as well in the future including mmWave and Sub-6 GHz.

“This is a key step toward achieving our vision of 5G for All,” said Neville Ray, chief technology officer at T-Mobile, in a statement. “This modem will power devices that tap into the 600 MHz low-band spectrum we’ll use to blanket the country with 5G. If regulators approve our merger with Sprint, we’ll have the crucial mid-band spectrum and resources needed to supercharge our network and deliver broad and deep, transformational 5G across the U.S.”

Meanwhile, the Federal Communications Commission (FCC) has voted to open up part of the mid-band in the 2.5 GHz spectrum giving telecoms more bandwidth to expand 5G beyond mmWave and low-band spectrums.