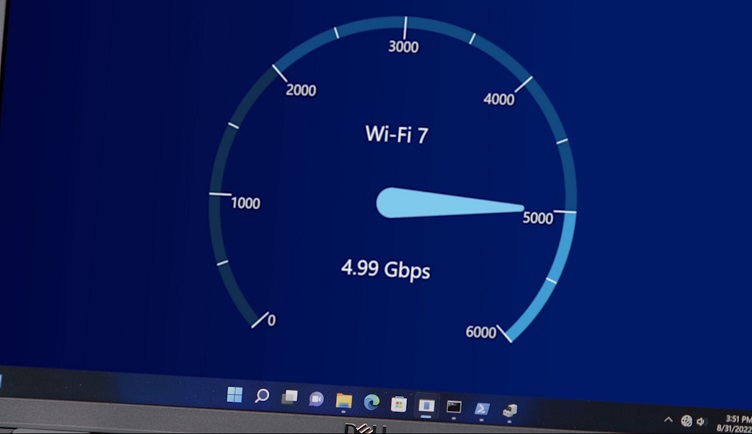 The demonstration of Wi-Fi 7 which pushed speeds beyond 5Gbps. Source: Intel

Intel Corp. and Broadcom Inc. have showcased what they claim is the first cross-vendor Wi-Fi 7 demonstration with over-the-air speeds greater than 5 gigabits per second.

The demonstration was used with an Intel Core processor-based laptop with a Wi-Fi 7 solution connected to a Broadcom Wi-Fi 7 access point. The companies showed that with Wi-Fi 7 it is capable of at least doubling the speed over-the-air with no wires of wireless broadband.

The companies said that Wi-Fi 7 is a key element to connecting everything as the internet evolves and industry collaboration allows the connectivity to become a reality quickly.

Wi-Fi 7 is the wireless broadband platform designed for the next 10 years that will require higher speeds, lower latency, improved reliability and greater capacity.

The next generation of wireless broadband could be used for new product classes such as augmented and virtual reality, 16K media streaming or future gaming use cases while simultaneously connecting large numbers of devices in the home or office.

“Wi-Fi 7 is the most powerful and capable Wi-Fi protocol yet and will allow Wi-Fi to continue to serve the most demanding applications in the consumer and vertical markets with the highest level of determinism yet,” said Phil Solis, research director of connectivity at IDC. “Interoperability testing between Intel and Broadcom will enable the development of products that can be used in the test beds for official Wi-Fi Alliance certification testing.”