What’s next for Li-ion batteries? 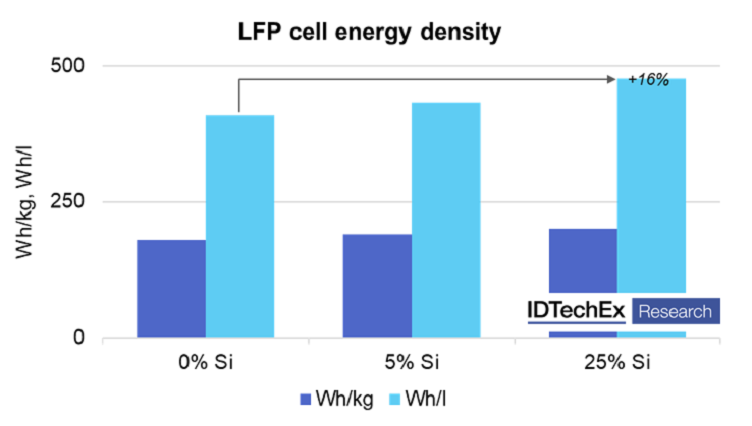 Using silicon anodes instead of graphite anodes could see large improvement in energy density in lithium-ion batteries and many companies are rapidly developing the technology for next generation batteries. Source: IDTechEx

Current chemical compositions of lithium (Li)-ion batteries are generally considered to have reached their performance limits. From cell materials to battery designs, further improvements are being developed that could enhance both performance and cost for future use in anything from handheld devices to electric vehicles (EVs).

According to new research from IDTechEx, one of the more promising moves being developed is the shift from graphite anodes to silicon anodes. Silicon material has been used in the anode in small quantities but has proved difficult in the past for stability and cycle life issues.

However, over the past decade and a half the technology has advanced to where cells can use anywhere from 5% to 100% silicon in the anode. IDTechEx forecasts significant growth in the adoption of silicon anode materials in Li-ion batteries as the technology matures although graphite will remain the dominant anode through 2030s.

IDTechEx said any improvement in cathode materials will be incremental but a larger shift in cathode technology and innovation could come from how they are synthesized.

Current techniques require high temperatures over long periods of time using high volumes of reagent and water. This is not just costly but impactful to the environment as well.

Nano One Materials is a company developing a solution to produce coated cathode materials in a partnership with Pulead, a cathode manufacturer. Another company, 6K Energy, is using microwave plasma reactors to produce cathode materials and can synthesize silicon anode and solid electrolyte materials. 6K has just this year raised $102 million in financing and entered into developmental agreements with Albemarie, a Li producer, and cathode startup Our Next Energy.

The ultimate prize seems to be the development of solid-state Li-ion batteries, which could offer significant improvements to safety by replacing flammable liquid electrolytes with a solid electrolyte. This technology could also push energy densities beyond 1,000 Wh/I.

While IDTechEx forecasts the market to grow to more than $8 billion by 2031, liquid electrolytes will remain an important part of the market. And in the meantime, the use of new additives and electrolyte formulations will help improve thermal stability, reduce vapor pressure and improve performance, pushing these liquid batteries to have a longer life cycle than many originally predicted.

In EVs, battery pack designs offer a way to improve performance. Many automotive companies are developing batteries with cell-to-pack designs to eliminate materials associated with module housing and packing efficiency. This helps to improve energy density and integration into a vehicle.

These space-efficient battery packs could improve volume utilization by 50%. Some battery makers such as CATL have a cell-to-pack design that could achieve a 72% volume utilization. While this will indeed maximize energy density and offer a route to cheaper, long-range batteries, the designs have reduced serviceability, meaning they could be limited to just EVs, IDTechEx said.

BMS software and analytics can help simultaneously improve safety, cycle life and charge time as well as increase the capacity of a battery. This is of obvious use in EVs, but it could also be used in other devices such as smartphones or power tools where improved charging times is desirable.

OnePlus 10T smartphone can go from 1% to 100% in just 19 minutes thanks to more intelligent charging algorithms and more efficient thermal management, IDTechEx said. And BMS could potentially improve other aspects of Li-ion batteries as well including cycle life, energy density, safety and more.

The full research can be found in Advanced Li-ion and Beyond Lithium Batteries 2022-2032: Technologies, Players, Trends, Markets.