Multispectral camera detects defects both on and under the surface

Three key technologies enable the camera’s unique imaging features: line scan imaging, complementary metal–oxide semiconductor (CMOS) sensor and multispectral capability. Line scan imaging, exemplified by the fax machine, involves the construction of a two-dimensional image using a single line of sensor pixels. The pixel line produces what is effectively a one-dimensional image; the movement of the target object leads to the second dimension as the camera acquires multiple single-line scans one after the other to build the full two-dimensional picture.

Multispectral imaging enables detection of defects both on and beneath the surface. Human vision only perceives light in the visible spectrum, allowing humans to see only features that are in view on an object’s surface. Multispectral imaging technology like that featured on the Linea ML 8k multispectral line scan camera uses different wavelengths to reveal subsurface features at various depths. Cameras detect optical reflections from a surface, and depending on the wavelength of the light source, the optical properties can vary significantly. Since the penetration depth of light in materials depends on the wavelength, a range of NIR wavelengths enables image capture beneath a substrate. Spectral independence of the RGB and NIR output channels allows for surface and sub-surface defect detection in a single scan, simplifying vision system design. 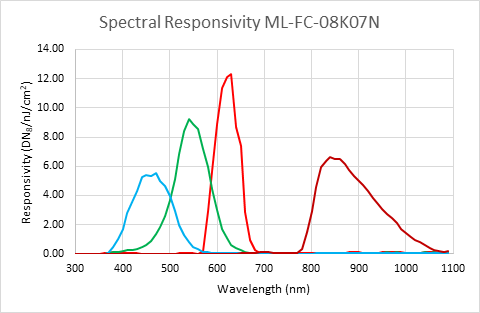 The Linea ML 8k multispectral camera is equipped with a range of features to meet the demands of today’s inspection applications.

Parallax correction also allows for the correction of an optical artifact caused by camera installations that are non-perpendicular to the surface of the web. For a multi-row sensor, the amount of magnification for rows that are not at the center will vary slightly from the central row. This results in the same space within the field of view being mapped to different pixels for each line.

With the look up table (LUT), the Linea ML 8k multispectral camera allows the user to customize the linearity of the camera’s response. This can be accomplished in two ways: by uploading an LUT to the camera via the file transfer features or by using the gamma correction feature. The gamma correction value can be modified at any time. The LUT can be utilized with any of the camera’s modes. When enabled, the LUT does not alter the maximum line rate or the quantity of the camera’s data output. It is recommended that the fixed offset available in the camera control be set to zero when the LUT is enabled.

The camera’s flat-field correction (FFC) corrects each individual pixel by means of digital subtractive offset correction and multiplicative gain correction. If the camera lacked this feature, recording of a homogeneous object could result in the display of slightly different pixel values. The FFC process is performed to correct lens shading in real-time, either in the camera or on the acquisition board. 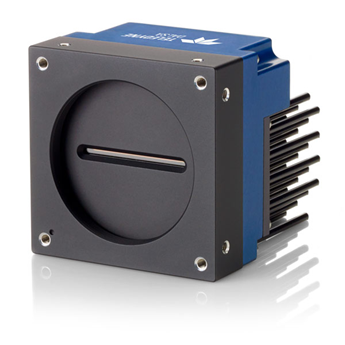 The Linea ML 8k multispectral camera is similar to a multifield application system with the only difference being the illumination method. In general, other than three-field illumination, multispectral imaging requires a white light plus an NIR light shining on the object at the same time. Using wafer-level coated filters, the camera captures an RGB color image and an NIR image. Each of the camera’s channels has independent exposure control, producing improved white balancing. In addition, the camera functions seamlessly from maximum speed to stop conditions.

The versatile features of the Linea ML 8k multispectral camera enable it to excel in a number of machine vision inspection applications. From print and web imaging to PCB and electronics inspection, the camera is designed to handle challenging inspection jobs.

Print and web inspection involves imaging continuous webs or sheets of everything from paper, textiles, film and foil to plastics, metals, glass and coatings. Commercial security printing applies markings comprised of special inks that cannot be seen with human vision as a measure to combat counterfeiting of items like banknotes, passports and other high security print. For this application, 100% of the security ink must be inspected for quality as part of the printing process. Previous machine vision inspection system designs were complicated by the need for multiple cameras to image different aspects of a banknote’s features. A single-color camera would inspect the banknote’s color, while a separate NIR camera would detect the security inks. With a multispectral camera like the Linea ML 8k, the design can be simplified and costs reduced by using a single camera to inspect both aspects of banknotes. The multispectral camera captures both RGB and NIR images in a single scan using combined white and NIR LED light sources.

Inspecting webs may involve multiple inspection events during production. With a large field of view and the ability to detect small defects at high speeds, the Linea ML 8k can perform seamless roll-to-roll inspection with higher dynamic range, multiple wavelengths and improved processing efficiency at a reduced price per pixel. 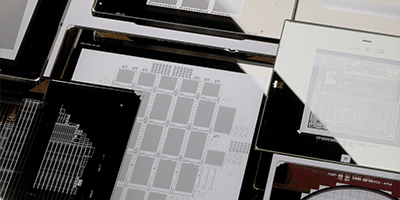 Figure 3. Multispectral imaging enables defect detection both on and under the surface of PCBs. Source: TeledyneImaging at various depths is critical to ensure quality in electronic circuit manufacturing. The Linea ML 8k camera’s multispectral capability enables sensing defects at different distances from the surface of PCBs or substrates. The uppermost layer of a PCB often has a top coating of colored paint. Beneath the surface, features like copper wires are buried deeper within the board. Since all of these elements need to be inspected to ensure a quality product, inspection system designers using cameras with limited wavelength capabilities would need to create a system using multiple cameras. Each camera would be tuned for specific wavelengths corresponding to the depth of interest for each of the PCB’s features. A visible-light camera can detect the colored paint on the surface of the product, while an NIR camera has better penetration depth to see deeper into the object to detect buried copper wires. The reflectivity of copper is also higher at NIR wavelengths, enabling an NIR camera to obtain better image contrast of the wires. Instead of a multi-camera setup, a single multispectral camera can simplify the machine vision system design by offering imaging capability at multiple depths to detect both defects on the surface of a PCB and beneath it. The Linea ML 8k can capture yield-limiting defects with high inspection system throughput. For wafer inspection, the camera’s spectrally independent RGB and NIR outputs allow detection of defects like micro-cracks at various depths throughout the target in a single scan. Multispectral imaging’s unique advantages continue to propel growth in other automatic optical inspection applications including food and materials sorting and medicine. With crucial requirements like low cost, high speed and reduced footprint, industrial applications present demanding circumstances that can be met by multispectral imaging solutions. Applications like fruit and vegetable inspection, material recycling and pharmaceutical products need more than color inspection, and benefit from Linea ML 8k’s spectrally independent output of RGB-NIR to detect defects.

The Linea ML 8k multispectral camera’s spectrally independent RGB and NIR outputs allow accurate detection of defects across a range of applications. The camera excels in applications that require defect detection both on and under the surface, from examining print and web to inspecting PCB and electronics to general machine vision tasks. Quality control is ensured via accurate flaw detection at various depths in a single device, eliminating complex and costly multi-camera setups. Expand vision capabilities today with the Linea ML 8k multispectral camera from Teledyne.