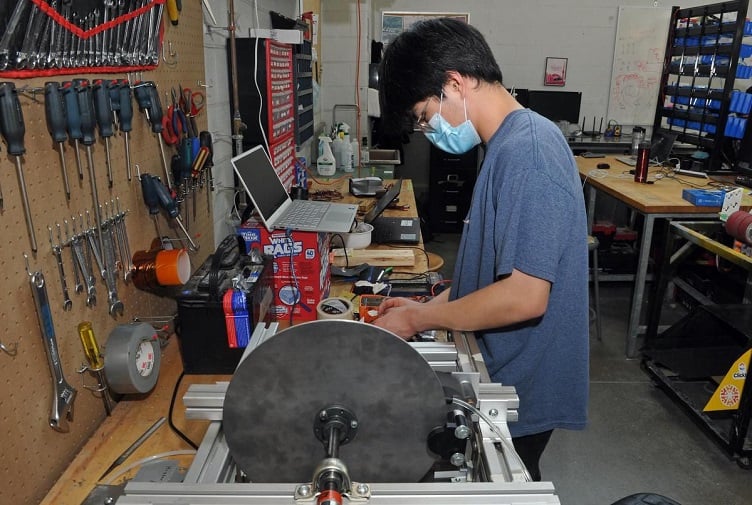 A member of Waterloop works on the Goose V hyperloop pod prototype that UW plans to use for both cargo and passenger transportation. Source: University of Waterloo

Researchers at the University of Waterloo (UW) are developing its fifth hyperloop pod prototype designed for both passenger and cargo transportation.

The idea (and potentially the future) of the hyperloop has been in turmoil after it was revealed Virgin Hyperloop was abandoning plans for passenger travel in favor of focusing on the cargo transport.

However, according to the leader of Waterloop, the hyperloop team from UW, the technology is feasible.

“As a human population all over the world, people are continuously striving to evolve…I think it’s due time that something new comes up,” said Krista Porter, business lead for UW’s 124-member hyperloop design team.

The team is working on levitating pods that could transport cargo or people at breathtaking speeds topping 1,000 kilometers per hour through near-vacuum tubes.

While Virgin is bowing out of the passenger travel aspect of the technology, several other companies are working around the world to develop both passenger and cargo transportation.

Goose V carries a motor and battery pack, a motor controller and guidance and braking systems measuring about 6 ft long. When fully deployed, a full-sized hyperloop would be able to carry up to 27 people each or full-sized cargo.

UW is also building a test track at the Region of Waterloo International Airport that will be about 100 meters long.

“This is just the first iteration of our test track,” Porter said. “We recently drafted up plans for a vacuum tube track, but we are still very much in the research phase of that, and also, we’re going to have to work hard to find funding to build that.”

While hyperloop technology has faced its criticism as a literal pipe dream and Virgin’s dropping of the passenger transportation aspect sets the industry back, the Waterloop team is encouraged.

“I’d say cargo is very feasible,” Halbertsma said. This is due to demand for the ability to move freight very quickly.

“There are still a lot of unanswered questions, but it’s definitely technology that’s worth exploring,” Halbertsma said.