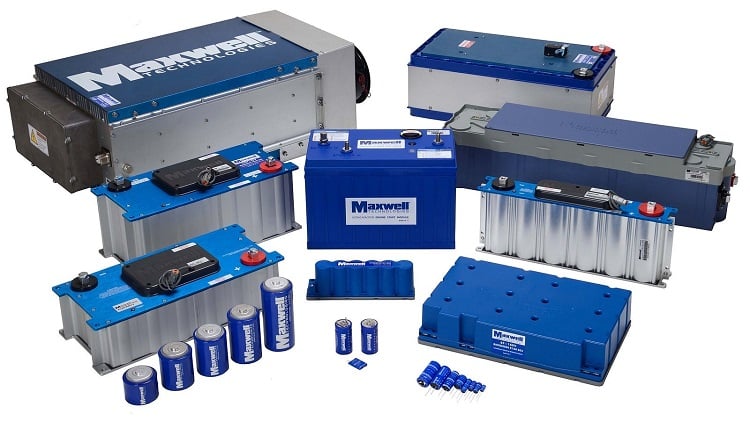 The incorporation of supercapacitors into electronic and electromechanical applications is growing rapidly due to improvements in volumetric efficiencies and costs. The growth of the electric vehicle (EV) market where supercapacitors are used in regenerative braking, short-term power bursts and battery power supply stabilization is a significant contributor to this growth. The market size for all supercapacitors was about $3 billion in 2020 and (depending on the source of research) is expected to grow 14% to 20% per year between 2021 and 2027.

A pure and basic comparison of the characteristics of lithium rechargeable cells and supercapacitors looks like this:

In the chart, there are many facts to digest. In terms of their function, the biggest difference between the capabilities of a battery cell and supercapacitor is that batteries have a higher energy density (meaning they can store more energy per unit mass), but supercapacitors have a higher power density (they can store and release more short-term power). This makes supercapacitors the best for storing and releasing large amounts of power more quickly, but batteries are still the winners for storing large amounts of energy over long periods of time.

Lithium cells, both primary and rechargeable, have often been used for power backup purposes. But supercapacitors never wear out or leak, they recharge very quickly when power is on, and there are many values to choose from depending on necessary hold-up time. Supercapacitors can be employed for long-term backup of very low current devices such as memory, clocks, sensors and short-term backup for higher current devices such as small motors, LEDs, relays and solenoids. There are some key differences between the design process for battery backup versus supercapacitor backup circuitry. First, a battery will last a long time at constant voltage whereas a capacitor will lose its voltage continually in linear fashion, so this may need to be accounted for via regulation or other means. A second factor is that the leakage current of a supercapacitor must be considered when calculating hold-up time, and in high temperature applications the leakage will be highest. Manufacturer data must be consulted.

Learn more about supercapacitor technology and manufacturers on GlobalSpec.com.

Where short-term high current is needed

In the latest generation key fobs, more distance and functions are expected, so transmit power must be increased. Placing a supercapacitor in parallel with a coin cell, (or two cells in parallel) means the high current can be drawn from the capacitor instead of the battery, extending battery life. Peak current capability is also increased. The same principles hold for firing a flash tube or LED in a camera or the solenoid in an electronic lock. Another supercapacitor application is to enable reduced conductor sizes in wiring for devices that consume short-term high current and low average current. In an automobile, placing supercapacitors near door locks, directional blinkers and audio systems can reduce wiring size, weight and cost.

Advancements in materials science, directed especially to electrodes and dielectrics will no doubt result in increases in volumetric (Wh/liter) and gravimetric (Wh/kg) efficiency and open up even more applications for supercapacitors.

Terry Conrad has performed 32 years of research, product design and technology management. He has been employed in quality and reliability engineering, design engineering, project management and as president in consumer electronics and military acoustic products design and production firms. Terry is currently an independent consultant, primarily in the fields of acoustics, batteries and component engineering. His clients have included General Dynamics, Molex, Lockheed Martin, Thomson-RCA and many small companies. He can be reached at tconrad@sealandinnovations.com