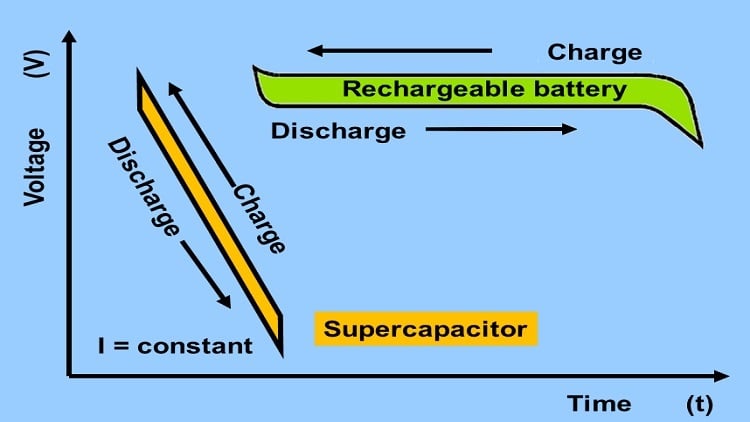 The different voltage behavior of supercapacitors and batteries during charging/discharging is clear. Source: Elcap/CC0 1.0

Supercapacitors have been around for a while, and although researchers began exploring their possibilities in the 1950s, recent coverage has focused on how this technology may revolutionize energy storage. There's been talk that batteries, as we know them, may change forever. There appears to be a good reason for such enthusiasm. They take only a few seconds to recharge, and in contrast to batteries, which deteriorate with time because they rely on chemical processes inside of the device, supercapacitors do not.

Supercapacitors are just large capacitors or capacitors with high capacity. The performance characteristics of these systems fall between those of electrolytic capacitors and rechargeable batteries, with larger capacitance and lower voltage limits when compared with standard capacitors. A supercapacitor with a 2.7 V capacity now will still have the same capacity after 15 years. All other existing battery designs gradually lose performance over time, which means that the 12 V battery today could only be 11.4 V after just 3 years.

The fact that supercapacitors may be 3D printed without the need to install a production line is likely the most eye-catching aspect of these devices. Equally exciting is the fact that they are so thin that they may be woven into textiles.

Battery performance has not improved across the board with every technological advancement, and there has been no linear progression in portable power. This is why, despite the advent of the lithium-ion battery in the 1990s that is used in smartphones, the lead acid battery that starts an automobile is likely still based on a design that is over 200 years old. Most of the time, newer is just better in some respects. For example, lithium-ion batteries have the advantage of a gradual, constant energy discharge over extended periods of time, but they are pricey. On the other hand, besides being inexpensive to produce, the primary benefit of lead acid batteries is their speed and efficiency in generating power in huge quantities.

There have been many technological advances in battery design over the years, but despite the hype, older chemistries have always managed to stay relevant and remain in use. There is currently no difference between supercapacitors and batteries in some respects. Despite its rapid charging, extended lifespan, large capacity, and ability to function in temperatures that would destroy most other chemistries, supercapacitors are terrible at supplying consistent power over extended periods of time. The major advantages and disadvantages of supercapacitors are discussed next.

[See also: Trends in the design and application of different capacitor types]

Pros and cons of supercapacitors

The advantages of supercapacitors include:

Compensating energy storage with speed of charging and discharging. Despite the fact that supercapacitors can only store about a quarter as much energy as a similarly sized lithium-ion battery (by weight), their rapid charging time makes up for this. Charging times are reduced by an astounding factor of up to a thousand times compared to batteries of the same capacity.

The usage of supercapacitors allows for the rapid recharging of some battery-operated toys. Organizations like Nawa are working to put this concept into production with electric vehicles (EVs). Instead of the hours, it takes to fully charge a battery-operated EV, imagine one that is powered by supercapacitors (instead of rechargeable batteries) and can be recharged in much less time than it takes to fill a fossil fuel vehicle's petrol tank.

Stable power supply. Supercapacitors can be used as backup systems or power buffers because of their ability to stabilize fluctuating electrical currents. When used in place of electrolytic capacitors, they help uninterruptible power supplies save a lot of money. However, the rapidity of energy transfer is both a feature and a problem. Some drawbacks of using supercapacitors are as follows:

Learn more about supercapacitor technology and manufacturers on GlobalSpec.com.

Supercapacitors are well-suited for uses that call for rapid charging and discharging, on the order of seconds to minutes. For example, to increase acceleration, certain Chinese hybrid buses already employ supercapacitors, and supercapacitors allow trams to move between stops and are recharged when they reach their destination. However, to this day, batteries are still the superior power source for tasks that demand continuous energy supply.