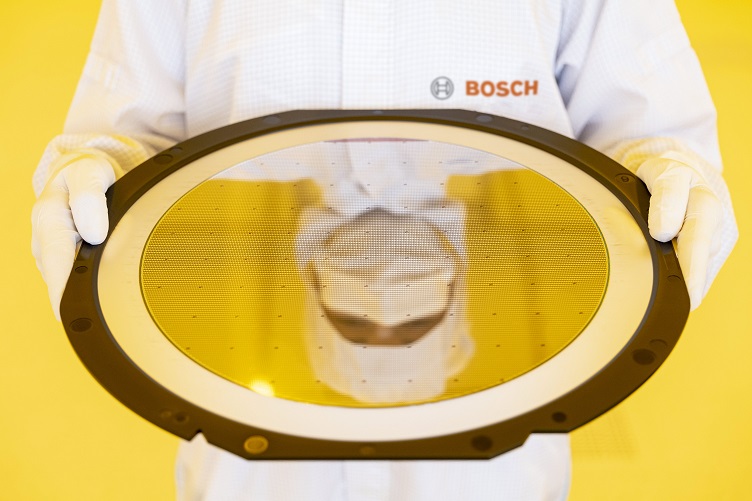 A Bosch scientist works on wafers at its new fab in Dresden, Germany. More fabs may be coming in Europe with the European Chips Act that is designed to boost chip manufacturing. Source: Bosch

The European Union said it will ease funding rules to aid in the construction of future semiconductor plants to bolster manufacturing of these chips and help decrease its dependence on foreign chipmakers.

Called the European Chips Act, the move would mirror the Creating Helpful Incentives to Produce Semiconductors (CHIPS) for America Act, a bill that was just passed by the U.S. House of Representatives that would provide $52 billion to help increase domestic chip manufacturing.

The European Chips Act would allow for $17 billion in additional and private investment by 2030, according to Ursula von der Leyen, president of the EU’s European Commission. This is on top of the $34.3 billion of public investments already planned by EU agencies.

“The European Chips Act will be a game changer for the global competitiveness of Europe's single market,” von der Leyen said in a statement. “In the short term, it will increase our resilience to future crises, by enabling us to anticipate and avoid supply chain disruptions. And in the mid-term, it will help make Europe an industrial leader in this strategic branch. With the European Chips Act, we are putting out the investments and the strategy. But the key to our success lies in Europe's innovators, our world-class researchers, in the people who have made our continent prosper through the decades.”

The European Commission said the recent chip shortage due to forced factory closures and capacity issues related to COVID-19 made evident the extreme global dependency on the semiconductor value chain and the limited number of vendors involved in production. Future geopolitical conflicts, pandemics or natural disasters could throw the entire system into chaos if nothing is changed, the commission said.

The European Chips Act will help to address weaknesses in Europe’s semiconductor supply chain as well as promote research and production of these chips through investments in public and private chip fabs. This will help the region respond to any future supply chain disruptions, the commission said.

Additionally, it will help the EU achieve its goal of reaching 20% global production of semiconductors by 2030.

The European Chips Act will have three main components that will help secure a supply of semiconductors as well as reduce dependency on foreign chipmakers.

First, the act will pool resources from member states and countries associated with the existing Union programs. $12.8 billion will be made available to strengthen research, development and innovation for prototyping, testing and experimentation of new devices, train staff and more.

Second, a new framework will ensure security of supply by attracting investments and enhanced production capacities such as advanced processing nodes. The fund will also allow access to finance startups to help mature innovations and attract investors.

Third, the act will enable coordination between member states and the Commission for monitoring the supply of semiconductors, estimating demand and anticipating shortages. This will help monitor the value chain by gathering key intelligence from companies to map primary weaknesses and bottlenecks.