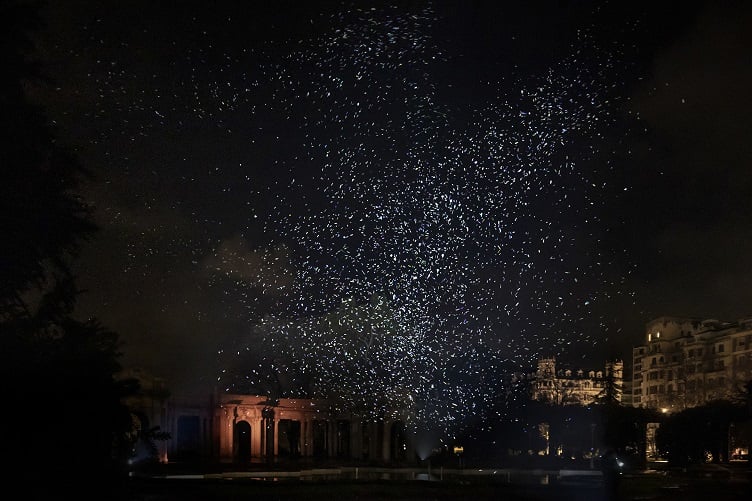 A cloud of light sparks formed from biodegradable bubbles on display at the Wellbeing Summit for Social Change in Bilbao-Biscay, Spain. Source: Studio Roosegaarde

The world is changing course and looking to better protect the environment in all ways, whether this be through the vehicles we drive or how we generate power.

One cause of pollution and air quality harm is traditional fireworks. However, the environmental impact of fireworks can be avoided, according to Studio Roosegaarde, with a line of organic fireworks. The company's organic fireworks are thousands of biodegradable light sparks that can float through the air.

The first demonstration of the organic fireworks was made at the Wellbeing Summit for Social Change in Bilbao-Biscay, Spain, where a performance of these light sparks was shown to the public for the first time.

Artist Daan Roosegaarde developed the idea based on the light of fireflies and converted it to the ritual of fireworks.

Called Spark, the organic fireworks transform the traditional methods of such celebratory methods as fireworks, balloons, drones and confetti and makes them sustainable.

A combination of design and technology allows the light sparks made of biodegradable bubbles to move silently in the air, reacting to wind and other natural elements.

In the demonstration, a 50 x 30 x 50 meter cloud of sparks interacted with each other and the environment.

The goal is to create a sustainable alternative for events, such as the Olympics, the Fourth of July, New Year’s Eve and more, that can still capture the reflection and celebration of fireworks.