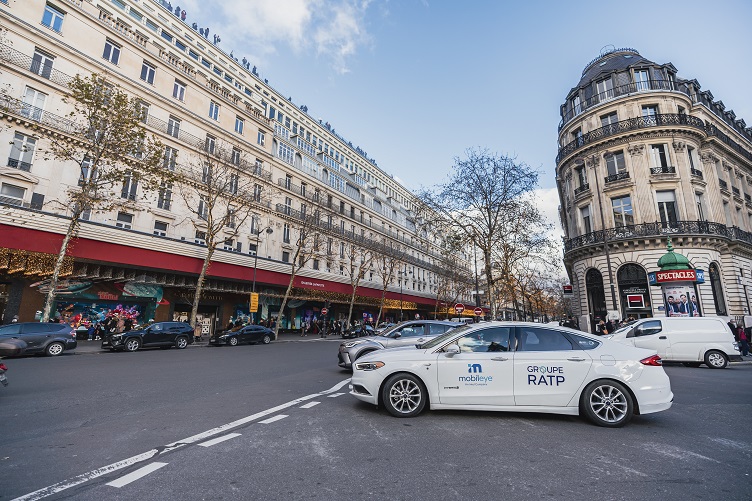 Mobileye will be the first company to test self-driving cars in Paris, France. The company will begin offering rides to employees at Galeries Lafayette Paris Haussmann pictured here. Source: Mobileye

Mobileye, a division of Intel, is expanding its autonomous vehicle testing program to France after receiving a permit to operate robotaxis on the streets of Paris.

It is the first autonomous on-demand service in the city of Paris, Mobileye said.

Mobileye will collaborate with RATP Group, the third largest public transportation operator in the world, and passengers will use the Moovit app to hail an autonomous vehicle for a ride. Intel acquired Moovit last year as a bit to expand the Mobileye platform with software to work with robotaxis.

As part of the project, on-demand self-driving services will be provided to employees from Galeries Lafayette Paris Haussmann four days a week. The self-driving test vehicles can transport two passengers at a time and a safety driver will be in tow along with an RATP co-pilot.

Because Paris is a modern metropolis, it faces challenges for human drivers and these same challenges are just as important for autonomous vehicles, Mobileye said. Testing self-driving cars in daunting environments is a major step in moving the market for these vehicles toward commercial readiness.

The company has already been testing vehicles in other markets such as New York City, which started this year, and will begin tests in Munich, Germany and Tel Aviv, Israel, slated to begin in 2022. Last year, it opened a robotaxi service in Japan. Other test beds include Detroit, Israel and China.

Earlier this month, Intel revealed it plans to take Mobileye public with the company remaining the majority owner. Moovit will be part of the IPO.