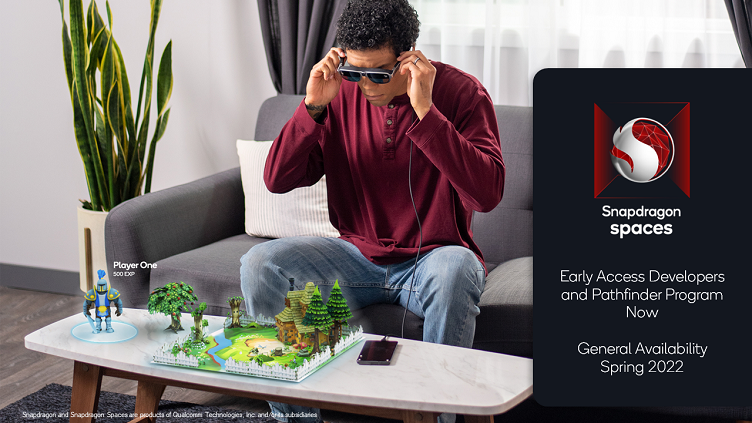 Qualcomm’s Snapdragon Spaces is an open platform for developing AR apps by giving developers all the tools to accelerate creation. Source: Qualcomm

Qualcomm and Lenovo are partnering to expand augmented reality (AR) software development to make it easier for software engineers to create AR apps.

Under the agreement, the companies will combine the Snapdragon Spaces XR Developer Platform with the ThinkReality A3 smart glasses from Lenovo. Developers can use the platform to build new 3D applications for AR glasses or add AR features to existing smartphone applications.

The move comes just a few days after AR startup Niantic opened up its first AR tools to the public in order to further mixed reality development.

Snapdragon Spaces is based on the Kronos OpenXR specification to ensure portability and is the first headworn AR platform optimized for AR glasses tethered to smartphones with an OpenXR runtime, the companies claim.

The features to the Snapdragon Spaces platform include:

Qualcomm assembled its AR technology from the assets from HINS SAS and its wholly owned subsidiary Clay Air, a provider of hand tracking and gesture recognition solutions.

The Snapdragon Spaces is an open platform that works with existing smartphones uniformly and the kit works with 3D Engines including Epic Games’ Unreal Engine and Niantic’s Lightship developer platform.

The Unreal Engine is a well known 3D creation tool for photoreal visuals and development of games. The lightship platform will integrate the Snapdragon Spaces to enable developers to create planet-scale AR experiences and expand reach to outdoor headworn use cases to connect and play with others in real time through multiplayer functions.

Leading smartphone and AR hardware OEMs including Motorola, Oppo and Xiami are partners with the Snapdragon Spaces with products expected to be available in 2022. The companies are also working with telecoms Deutsche Telekom, NTT DOCOMO and T-Mobile.