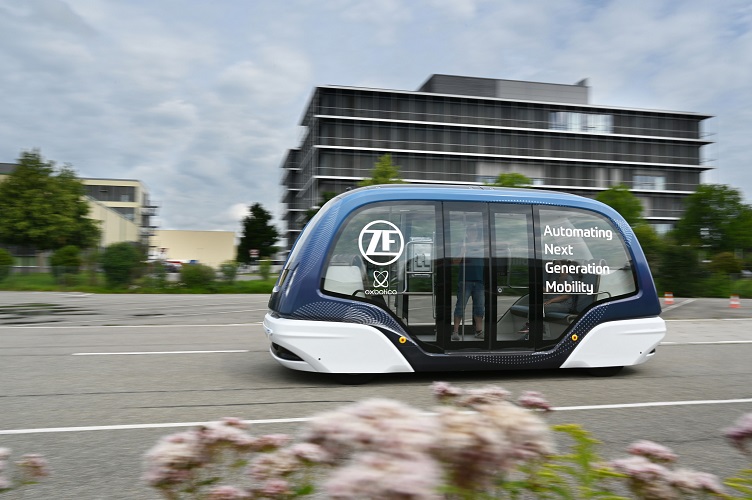 The autonomous system will be developed to carry both passengers and cargo depending on the scenario. Source: ZF

ZF has invested in Oxbotica, an autonomous vehicle software company, to develop a Level 4 self-driving system that would be deployed to a fleet of passenger shuttles worldwide.

Under the agreement and investment, ZF and Oxbotica’s self-driving system could be integrated into various vehicles including those for mobility-as-a-service (MaaS) shuttles to provide on-demand passenger and transportation vehicles for cargo and other goods.

According to the companies, autonomous shuttles will grow substantially over the next decade, which will increase access to mobility, improve road safety, reduce congestion and boost productivity.

ZF has invested about 5% in Oxbotica and will take a seat on the advisory board. The companies have been working together since 2019 and Oxbotica integrated its autonomous vehicle software with ZF’s ProAI and full-range radar.

The companies will also work together to develop the autonomous shuttle deployments and validation and verification of the self-driving vehicle system.

"The entry investment of 5% underlines our confidence in Oxbotica's capabilities,” said Torsten Gollewski, executive vice president of autonomous mobility systems at ZF. “Together with Oxbotica, we are developing self-driving systems for autonomous people and cargo mover addressing the current challenges in public transport and logistics.”

Year of the shuttle

This year has seen a crazy number of developments in self-driving transports and ride-hailing services with numerous companies beginning pilot projects globally as autonomous technology begins to become more pervasive in the market.

This week, Mobileye said it will begin two projects in Tel Aviv, Israel, and Munich, Germany, with a new electric vehicle that will hold up to six passengers at a time.

Last month, Waymo began self-driving rides in San Francisco, giving rides to the local community to test its services and gather more data on its vehicles.

Other moves include Colorado deploying what it claims is the largest autonomous shuttle fleet, Ford launching self-driving cars on the Lyft network, Russian startup SberAutoTech developing a shuttle, Mobileye testing self-driving cars in New York City, Waymo and Cruise applying for permits to charge for robotaxis and many more.

Most recently, Finnish startup Sensible 4 and Swiss Transit Lab have started a long-term project in Switzerland for Level 4 autonomous shuttles and Whitby, Canada, will start what it claims is the longest autonomous shuttle route in North America in a new pilot project.

As the technology continues to evolve and testing gives these companies more data on automated features, it is likely more projects will emerge, and services come online in the coming months and years.