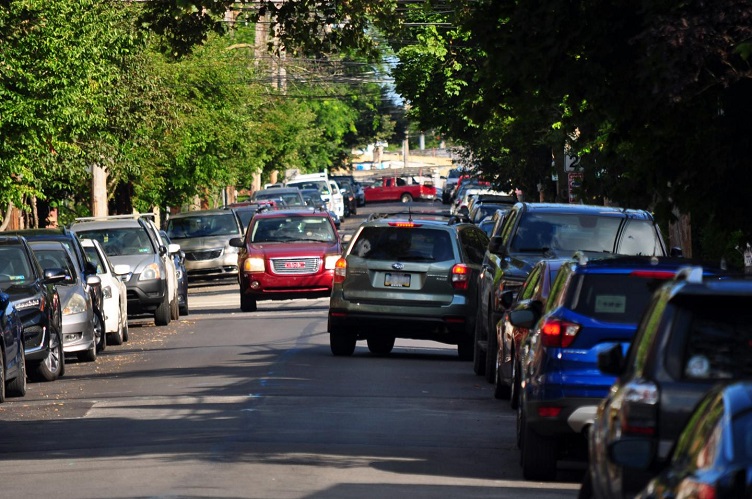 Busy, narrow streets are obstacles that cars must deal with daily. Self-driving cars will have to deal with this as well. Source: Carnegie Mellon University

Narrow streets can become even worse with parked cars on both sides, leaving limited space for vehicles to travel in both directions. Cars sometimes must duck into a gap between the parked cars or pull over for a car to pass first.

While humans can negotiate these streets, programming an autonomous vehicle is another story.

"It's the unwritten rules of the road, that's pretty much what we're dealing with here," said Christoph Killing, part of the Autonomous Aerial Systems Lab at the Technical University of Munich. "It's a difficult bit. You have to learn to negotiate this scenario without knowing if the other vehicle is going to stop or go."

CMU said they are the first researchers to delve into this specific driving scenario, which requires drivers to collaborate to make it past each other safely without knowing what the other driver is thinking. Drivers, human or not, must deal with other, potentially aggressive drivers or with those who are more willing to pull their vehicles over.

CMU developed a method to model different levels of driver cooperativeness and used those models to train an algorithm that could assist a self-driving vehicle to safely navigate the situation. The algorithm has only been used in simulation and not on a vehicle in the real world, but they found the algorithm performed better than current models.

This is just one scenario that autonomous vehicles will need to have special algorithms for when they come online. Others include merging onto a highway, changing lanes or making a left turn against traffic at an intersection.

The full research can be found in the journal Machine Learning.