Study: Robot doctors would likely be accepted by patients

Researchers from MIT and Brigham and Women’s Hospital conducted a study on patient acceptance of robots in a healthcare setting. 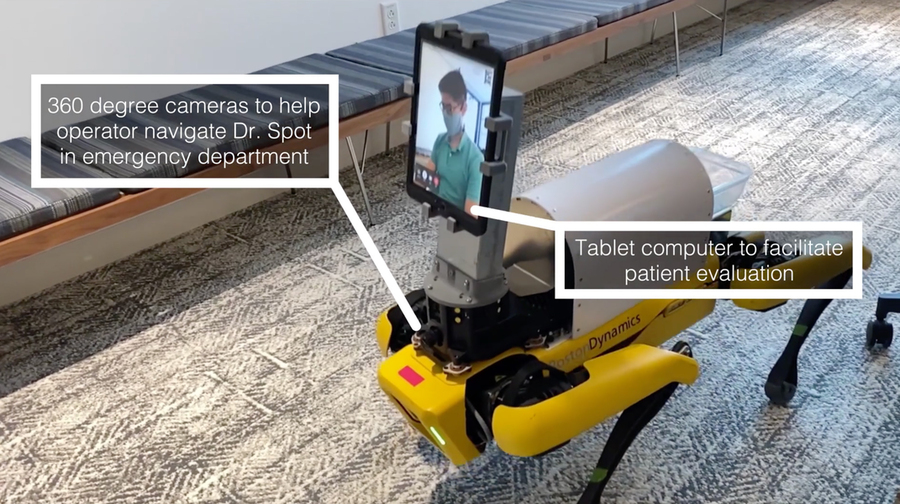 Patients were interviewed about their symptoms via video connection, using an iPad carried by a quadruped robot developed by Boston Dynamics. Credits: Photo courtesy of the researchers

MIT researchers wondered how people would react if they were evaluated by a robot instead of a nurse or doctor in a healthcare setting. Robot and technology adoption relies on people’s acceptance of them. To explore this, the team conducted a nationwide study and testing with robotics in a hospital.

The national survey was administered to 1,000 people through the market research firm YouGov. The questions were focused on the acceptability of robots in healthcare and if people would be comfortable with robots performing triage and other tasks. The results showed that participants were open to these kinds of interactions.

Robots outfitted with an iPad to allow for remote video communication with healthcare providers were then tested in the emergency department at Brigham and Women’s Hospital in early 2020 when COVID cases were surging in Massachusetts.

51 people were approached in the hospital waiting room and triage tent and asked to participate. Of that 51, 41 people said yes. These participants were interviewed about their symptoms via a video connection on an iPad carried by a dog-like robot from Boston Dynamics., after which 90% of the participants reported being satisfied with the robot and said it was similar to talking to a person.

The study suggests that it would be worthwhile to develop robots that can perform procedures that currently require a lot of human effort. Another potential use could be administering COVID-19 nasal swab tests.

The MIT team is continuing to work on sensors that can obtain vital sign data from patients remotely. They are also working on integrating systems into smaller robots that could operate in a variety of environments.

A paper on this research was published in JAMA Network Open.